These three poems by Hari B Khalsa were written as part of a larger series in the early days of the Coronavirus pandemic. They chronicle the small and large moments of a woman’s days, expressing what was experienced as both real and earthly, as well as addressing the internal, the spirit, the imagination that takes flight on the wings of birds.

She hasn’t found
the truth the crow
knows, it’s cocky

on her western shore,
bellies pressed
to warm sand, eyes

to the sea. There’s no
divining the tides
on her map. Across

her chest a line
is drawn. Is she claw
or cupped palm,

should she startle
and fly or close
both eyes and wait?

She Stands at the Crossroads

She stands at the crossroads
of her rage, decides
whether to shoot it

black out of a cannon
or fold it, tuck it
neatly into her breast

pocket and bring it home
with her. Instead
she gnaws off

the smallest bit
to carry into her future,
like the pungent

sting of cayenne—
sets the rest
down in the middle

of the road,
leaves it for the crows,
circling vultures.

She walks barefoot
in the dark
over stones placed

on the path
a hundred years ago,
searches for a sliver

of light, someone
to take her in, seat
her at their table,

give her food. It’s
a dream, she knows,
still she weeps

when she wakes—
yearns to be the one
on that precipitous

night to open
the door
and let her in. 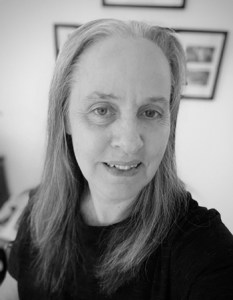 Hari B Khalsa’s poems have appeared in over fifty publications. Her chapbook Life In Two Parts was selected as a finalist in the 2009 Main Street Rag Chapbook Competition. Her full-length book of poems Talk of Snow was published in 2015 by Walrus Books. Her second chapbook She Speaks to the Birds at Night While They Sleep winner of the Tebot Bach Clockwise Chapbook Contest is scheduled to be released June 2021. She has been a fellow at the Hambidge Center for the Creative Arts and Sciences and Associate Artist at the Atlantic Center for the Arts. She lives in Los Angeles with her husband, working as a partner in their healing center. Website: haribpoet.com