In his collaged paintings, Jacob Lehmann explores the relationships between isolation and nostalgia, in connection to childhood.

THE RELATIONSHIP BETWEEN LANDSCAPE AND CHILDHOOD and how place influences upbringing influences our point of view. By using landscape and place as a measure of isolation, these works discuss the growing self isolation of childhood, with a reference point being my own childhood in the late 1990s and early 2000s. Growing up during that time period created an interesting dichotomy in the way in which children played and explored the world around them.

The use of unconventional painting materials, such as holographic vinyl and fabrics are referencing the encroachment of technology on play and the child during that time period. This use of collage also plays into the ideas of construction of space, creating surreal landscapes that are fractured and devoid of figures. This absence of figures and the construction of space that are difficult do place the viewer create a space that is isolating. This is to represent how the inclusion of technology in play and childhood, by nature, isolates the “player” as they often don’t need imagination of others to fulfill those needs. Imagery that alludes to the presence of the digital, such as binary and barcodes, solidify the shift in focus of the child.

The use of photographs in the collages also references memory and feelings of nostalgia. Memory within itself is interesting because as memories are remembered they are altered and recontextualized in reference to other memories and lived experiences. In the work, these photographs represent that, and are recontextualized visually in collage, not unlike how they are given new meaning in our own heads.

These works all stem from my own childhood and my own experiences. As a kid, growing up in between the rural south and the suburbs of a college town, my childhood could be described as a lonely one. I remember either playing outside and using my imagination to entertain myself until the sun went down, or playing with toys and video games indoors. Looking back, I noticed that a lot of the toys I played with straddled that line between “smart toys” and traditional playthings.

This has created an interest in how kids perceive the world based on how they are brought up as well as the evolution of traditional play and cyber play. That cross section in our culture happens to overlap with my own childhood and therefore brings in feelings of nostalgia for the past.

My goal is to further explore these feelings and discover new methods to demonstrate play and its relationship to space, whether it be physical or digital, while also experiencing memory associated with images that are relatable to a broader audience. What is cultural memory? How do people remember their own childhoods? What about space and play do people of all ages gravitate towards? Those are questions I often ask myself in my studio practice.

Growing up in the rural south, I never really noticed all of the old barns and mills slowly falling apart around me. There is so much space out there. I remember the stories my grandparents would tell us about what would go on at the mills or stories from their farm.This work pertains to reliving those stories, while creating a narrative of my own. Stories change. They’re pieced together time and time again; ever evolving, inspiring the use of collage in this work. The barn stands alone in a field, isolated from the mill floating above while it rots away with time. That is how I remembered it. The astronaut floats in; a stand in for myself feeling as if I didn’t belong in this space. The elements of the sun and the bars floating are a sign of the contemporary nature of childhood- flashy and brightly colored and are layered on top of the old image to obstruct its view. The old fades, and in time, so will the new.

This work is about the pull and destruction of childhood. Overtime, childhood has changed, and over the past 30 years, the evolution has exponentially increased. With the introduction of the digital age, represented by the artificial magenta and fractal planes floating in the sky, they alter and pull the traditional landscape apart. The school bus is a symbol of the child, left abandoned and alone while the world around it shifts and gets sucked into nothingness

Play has always been an important part of my work. In a way, I choose collage because it is an advance form of play. Crafting and creating spaces and images out of others allows for control and tests the imagination. “Distanced” is ultimately about the memories of going to the fair as a child and the magic that was and is play. While grounded in reality, it felt as if reality stopped for moments, and by incorporating surrealist imagery, like the planets looming overhead, I create a dream state allowing others to see

Wander. This work is an extension of my wandering nature. I constructed this space with the intention of it feeling isolated. From the use of the contact sheet prints to create the silhouette of a motel, to the painted landscape of the desert, this space is meant to feel isolated and artificial. The one hope the paper airplane made of a map, to guide the viewer, potentially, where they need to go.

“End of Summer” is about exactly that. That feeling you get when the summers of your childhood come to a close. We watch fireworks, we listen to the cicadas, we go swimming, or in this case, we watch a space shuttle launch on the beach. This work focuses primarily on nostalgia and the dreamlike quality of my work. The holographic vinyl on the surface allows you as the viewer to see yourself here, as an invitation into this space created out of paint, photographs, and vinyl alike.

This work is an experimentation on the incorporation of digital imagery and non traditional painting techniques and materials. The synthesis of this space comes from the basic form of space: planes. This world that has been created is slowly falling apart, all of its organic matter melting away, leaving the plastic material and the geometric and inorganic matter behind. This space is vacant, with the exception of a grounded airplane, meant to symbolize hope of escape, but also that of isolation.

The late 90s and early 2000s saw an incredible shift in play. Traditional methods of childhood entertainment made way for the incorporation of technology, causing play to become individualized rather than communal. In this work, the ideas of abandonment and isolation are put on display. The toys scattered and piled up at the base of large satellite dishes- as reflection on the loss of play in favor of digital entertainment and communication. The binary code complicates the space, causing it to feel distant from the viewer, which is in stark contrast the the exposed wood meant to symbolize the connection to the earth slowing being covered by white.

This one is pretty self explanatory. The title says it all.

This work is a fragmentation of my memories of my favorite place: my grandparent’s farm. The farther we move away from those memories the less specific they become. The background becomes indistinguishable. My relationship with this place has finally become deconstructed, falling apart, with little identifiability, the use of the holographic vinyl on this work is to pull the viewer into the space as well, but due to the nature of the space, the viewer becomes isolated in the in-between.

This work was made after graduating my undergraduate degree. The uncertainty of the world after such an important event is captured in this piece in the way the painting shifts and fragments a simple landscape into many planes. These pieces, are different in time of day and saturation, to create a sense of confusion. The location marks are spread out to represent the possibilities, while the boat is the only “figure” in the work, to push the idea of isolation and loneliness during that time period in my life. 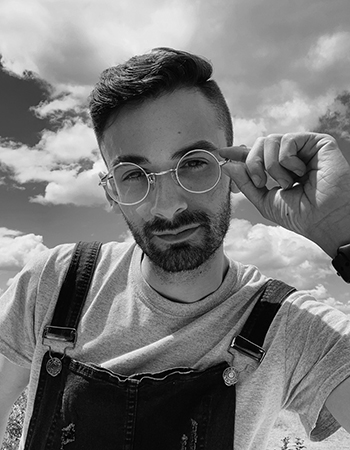 Jacob Lehmann is a visual artist currently based in South Bend, Indiana. Originally from Clemson, SC, Lehmann has fond memories of learning and exploring between the suburban home of his parents and the rural farm of his grandparent’s home in Pickens, SC. It wasn’t until high school where he began to take an interest in drawing and painting and where he decided to pursue a degree in visual arts at Clemson University and is currently a graduate student at the University of Notre Dame. Lehmann has also worked as a graphic designer and high school art teacher.