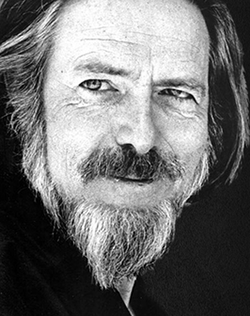 Our favorite rogue Zen philosopher, Alan Watts had a gift for contextualizing the principles of Zen and translating them in a way that non-Buddhist people would be able to comprehend. In this excerpt from his short book, ‘Beat Zen Square Zen and Zen‘, he talks about the importance of understanding our own culture thoroughly so as not to take for granted its premises. The Beat poets – who came into the spotlight around the same time as Zen in America – were a generation of artists who rejected the hegemony of mainstream culture in favor of exploring their own subjective experiences and freedoms, and through whose lens Zen took on a very particular hue.

The appeal of Zen, as of other forms of Eastern philosophy, is that it unveils behind the urgent realm of good and evil a vast region of oneself about which there need be no guilt or recrimination, where at last the self is indistinguishable from God.

But the Westerner who is attracted by Zen and who would understand it deeply must have one indispensable qualification: he must understand his own culture so thoroughly that he is no longer swayed by its premises unconsciously. He must really have come to terms with the Lord God Jehovah and with his Hebrew-Christian conscience so that he can take it or leave it without fear or rebellion. He must be free of the itch to justify himself. Lacking this, his Zen will be either “beat” or “square,” either a revolt from the culture and social order or a new form of stuffiness and respectability. For Zen is above all the liberation of the mind from conventional thought, and this is something utterly different from rebellion against convention, on the one hand, or adapting foreign conventions, on the other.

Conventional thought is, in brief, the confusion of the concrete universe of nature with the conceptual things, events, and values of linguistic and cultural symbolism. For in Taoism and Zen the world is seen as an inseparably interrelated field or continuum, no part of which can actually be separated from the rest or valued above or below the rest. It was in this sense that Hui-neng, the Sixth Patriarch, meant that “fundamentally not one thing exists,” for he realized that things are terms not entities. They exist in the abstract world of thought, but not in the concrete world of nature. Thus one who actually perceives or feels this to be so no longer feels that he is an ego, except by definition. He sees that his ego is his persona or social role, a somewhat arbitrary selection of experiences with which he has been taught to identify himself. (Why, for example, do we say “I think” but not “I am beating my heart”?) Having seen this, he continues to play his social role without being taken in by it. He does not precipitately adopt a new role or play the role of having no role at all. He plays it cool.

The “beat” mentality as I am thinking of it is something much more extensive and vague than the hipster life of New York and San Francisco. It is a younger generation’s nonparticipation in “the American Way of Life,” a revolt which does not seek to change the existing order but simply turns away from it to find the significance of life in subjective experience rather than objective achievement. It contrasts with the “square” and other-directed mentality of beguilement by social convention, unaware of the correlativity of right and wrong, of the mutual necessity of capitalism and communism to each other’s existence, of the inner identity of puritanism and lechery, or of, say, the alliance of church lobbies and organized crime to maintain laws against gambling.

Beat Zen is a complex phenomenon. It ranges from a use of Zen for justifying sheer caprice in art, literature, and life to a very forceful social criticism and “digging of the universe” such as one may find in the poetry of Ginsberg, Whalen and Snyder, and, rather unevenly, in Kerouac, who is always a shade too self-conscious, too subjective, and too strident to have the flavor of Zen.

When Kerouac gives his philosophical final statement, “l don’t know. I don’t care. And it doesn’t make any difference”— the cat is out of the bag, for there is a hostility in these words which clangs with self-defense. But just because Zen truly surpasses convention and its values, it has no need to say “To hell with it,” nor to underline with violence the fact that anything goes. It is indeed the basic intuition of Zen that there is an ultimate standpoint from which “anything goes.” In the celebrated words of the master Yun-men, “Every day is a good day.” Or as is said in the Hsin-hsin Ming:

Read on: click here for Alan Watts on pain and time and here for Jack Kerouac and the rucksack revolution.

1 thought on “Alan Watts on Beat Zen and Square Zen”