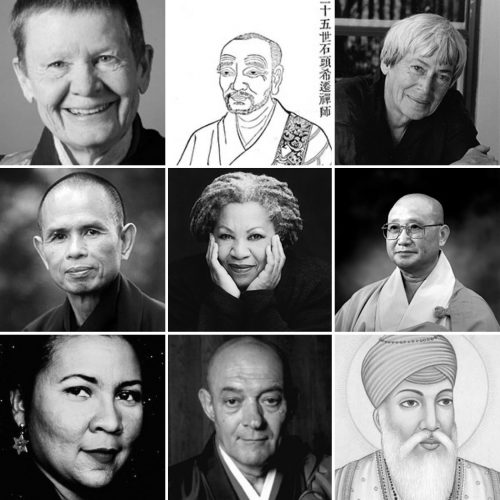 2019 was The Dewdrop’s fledgeling year, and when I look back on all the posts since January, I see a backlog of books I happened upon, poems I heard, and material sourced from conversations and encounters I had with friends and strangers who inspired me to read certain texts I might never have come across before. Of the 157 posts published this year, these are the ones that were most popular with The Dewdrop’s readers: from the classic Zen poem, The Song of the Grass Roof Hermitage, to the Sufi poet Kabir’s The Moon Shines in my Body, to Toni Morrison’s more contemporary I Am Not Seaworthy; from Thich Nhat Hanh and bell hooks’ reflections on love to Seung Sahn’s meditations on death; from Ursula le Guin’s defense of imagination to Erich Fromm’s psychoanalytical perspective on satori; the texts cover a range of writers whose words – whether they were written this decade or a millennium ago – continue to encourage us and open our minds as we explore the mystery of our lives and the meaning of our humanity.

Erich Fromm was a humanistic philosopher primarily interested in man’s relationship to culture and society. In his work he always stressed that understanding our basic needs as humans was paramount in this investigation and in moving towards a better state of collective sanity. From within this discussion, Fromm was interested in religion and published a series of lectures on Zen and psychoanalysis, from which the following excerpt is taken. In this passage he considers the subtleties of the experience of satori and what kinds of pitfalls looking at it through the lens of psychoanalysis might throw up.

9. I Am Not Seaworthy – Toni Morrisson

Although Toni Morrison, who passed away this year, was primarily a novelist and an essayist, The Dewdrop was excited to find a short series of poems also penned by the author as a special contribution to the Black Mountain Institute. The five poems were printed back in 2002 for a limited edition letterpress that was released to help raise funding for the institute. ‘I Am Not Seaworthy’ is one of these poems, a reflection on life and death, an expression of the desire to be ‘earth bound’ and ‘star fixed’ rather than cut loose riding the sea.

Shitou – known as Sekito Kisen in Japanese – was an 8th century Chinese monk, a student of Huineng and Huineng’s successor, Qingyuan Xingsi (Seigen Gyoshi). He is credited with writing two of the most famous Zen poems in China – the ‘Sandokai’ and this, the ‘Song of the Grass Roof Hermitage’. The beauty of this poem lies in its humanity and its emphasis on the simplicity of spiritual practice – the grass roof hermitage is not a grand temple building inhabited by clergy, but a small, modest dwelling that could be constructed by anyone, and meditation itself is a matter of turning the light around to shine within, and returning to just that.

7. Ursula le Guin and the Importance of Imagination

This essay by Ursula le Guin – a talk given at a meeting of Oregon Literary Arts in 2002 – is one of the longest posts on The Dewdrop to date, which is perhaps appropriate given that the subject of the piece is the merit of reading and the importance of nurturing the imagination. In America, she posits, literacy is needed insomuch as we need to read the operating instructions; the love of literature itself has been replaced by other less reflective and intimate media. And if we don’t foster our own imaginations as well as our children’s, she warns, we risk losing our identity as humans and forgetting the ties that bind us to the global and historic community of humanity. After all, she argues, “Listening is an act of community, which takes space, time, and silence.”

6. Kabir – The Moon Shines in My Body

Kabir was a 15th century Indian mystic and poet who was also a weaver by trade. His vision combined the philosophies of Hinduism and Sufism, and he is considered both a Sufi and Brahmin saint. His poetry is rooted in nature and the experience of the ordinary, through which he seeks the ‘unstruck drum of eternity.’ ‘The Moon Shines in My Body’ is an ode to the human condition, to the blind eyes that can’t perceive their own intrinsic divinity and which clamour after individualistic pursuits, unaware of the constant imminence of God.

‘When Things Fall Apart’ continues to be one of the most enduring spiritual books of the last century that holds wide appeal as a treatise on suffering and how to manage it. Pema Chodron recommends that we lean into pain and suffering, rather than avoiding it or trying to escape it. In this extract from the chapter ‘Hopelessness and Death’, she talks about the relationship of hope to fear, and how hope is really just a crutch, or a babysitter; a way of delaying the necessity of looking truth squarely in the eye. In abandoning hope, she advises, we stand a chance of finding confidence in our basic sanity.

To love well, we need to understand what we mean when we talk about love, and what love means to us all individually on the deepest, subconscious level, in the part of ourselves that began to be constructed in our earliest lives. This is the premise feminist scholar and cultural critic bell hooks establishes at the beginning of her book of essays on the subject of love, ‘all about love’. She goes on to argue that we must look at love not as an abstract concept, but as a concrete manifestation of actions. “We would all love better,” she writes, “if we used it as a verb.”

3. Pulling Out the Rug – John Daido Loori on the Barrier Gate

Zen legend often brings up stories of students who have to work hard to be accepted into temples, and of masters who put potential candidates to rigorous tests. The most famous example is that of Bodhidharma and his disciple Huik’e, who stood in the snow for three days and even cut off his own arm to prove his sincerity to his teacher. It may seem cruel and extreme, but this tradition, argues John Daido Loori in his essay on barriers to entry in the study of Zen, is essential in ensuring that any potential student is ready to make the substantial commitment of taking up zen practice.

2. Thich Nhat Hanh on the Elements of True Love

What are the most basic elements of love and how can we manifest them in our lives and our relationships? This is the question that Thich Nhat Hanh tackles in his short book, ‘True Love’. Looking at human love through the lens of Buddhist teaching, he breaks it down into four aspects: loving-kindness, compassion, joy and freedom and uses his direct and simple style to advise us how to put these elements to work in our own lives.

1. What is Death? You Are Already Dead

Seung Sahn was the first Korean Zen master to come to live and teach in the West. His style borrowed from a number of different Buddhist traditions, particularly Rinzai. The book, ‘Dropping Ashes on the Buddha’ is a collection of his teachings that happened both in person as well as through correspondence – a way of transmission that he was well known for.  This excerpt from that book recounts a meeting between Seung Sahn and one of his students in which he is asked about death and responds by trying to break down the student’s fundamental construct of the concept itself.