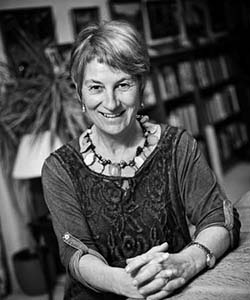 “When the light of wisdom shines, the darkness of passion suddenly becomes bright, and to an awakened one they are not two separate things,” wrote Daikaku Zenji in 13th century Japan. This turning inward of the light of awareness is at the root of Zen practice, and something that is of great interest to psychologist and writer Susan Blackmore. Best known for her book, The Meme Machine, which framed cultural and cognitive evolution through the proliferation of ideas and concepts, Blackmore is a keen investigator of consciousness, and has devoted much of her career to trying to understand the phenomenon of being. Ten Zen Questions, is a candid account of her experience of Zen practice. In this excerpt from the first chapter of her book, she grapples with the most basic statement of her own consciousness. Similar to Sri Ramana Maharshi’s repeated enquiry, ‘Who Am I?’, ‘Am I conscious now?’ is powerful question that turns the light of attention inwards and stirs the mystery of who and what we are with each passing moment.

I know now, from all the many students who have trodden this path with me, that the hardest part is remembering to ask the question. Even though I feel driven to keep asking, there are often long gaps when I fail to do it. So I’ve tried various strategies, and my students have too.

Some tell me they put stickers all over their house: “Are you conscious?” on the front door; “Am I conscious now?” on the toaster; “Conscious?” on the kettle; “Are you sure you’re conscious now?” on the pillow. Others get into pairs so that they can keep reminding each other – “Are you conscious now?”. Some take to special times and places; they ask the question every time they go to the loo, or always ask the question when going to bed, or always remember when they have a drink or food. Sometimes these tricks work; sometimes they don’t.

The hardest part is remembering to ask the question.

I wonder why it’s so hard. It almost seems as though there is something conspiring to prevent us asking the question; some thickness in the way, some awful lethargy that makes it hard to face up to …. to what? To being fully aware, I suppose. The question propels becoming conscious and becoming open to everything around. Although it seems impossible, in good faith, to answer “No”, it is hard work to answer “Yes” “Yes, I am conscious now”, perhaps because it reminds me that most of the time I cannot have been. But it’s worth it. I persevere.

Ah, here’s a new question: Can I stay this way?

A funny thing happens, again and again. I ask the question. I answer yes. I am fully conscious now, I have woken up to this present moment. Right. This is easy. Here I am. But before I know it I am far away in distraction, thinking about something else, being angry with someone, being miles away in the past or the future or something completely invented and troubling and annoying.

The question appears again (from where?). I sigh. Lost again. Yes, I am conscious now, but where was I? Forget that for a moment. Steady. Ask the question.

I wonder what this unconsciousness is. I cannot believe I spend most of my life in a kind of darkness.

It troubles me that I seem so often to be unconscious. I wonder what this unconsciousness is. I cannot believe I spend most of my life in a kind of darkness. Surely that cannot be so. Yet every time I ask this question it feels as though I am waking up, or that a light is switching on. All the more troubling is that this light is so rare. By asking the question and switching it on, I seem to have stumbled on the fact that my normal state of life is some horrible kind of gloom. Was this why I was so troubled; so ill at ease? Was this why I so often felt that nothing was real; that nothing was clear, as though something I couldn’t place obscured the view and made my head swim?

I want to explore this darkness; this normal state if that is what it is. But that is impossible isn’t it? How can I look into the darkness, when looking makes it light?

The psychologist William James tried this back in the 1880s. He likened the stream of consciousness to a bird’s life; an alternation of flights and perchings. He tried to see the flights for what they are, but found he annihilated them in the process, like a snowflake crystal caught in a warm hand. ‘The attempt at introspective analysis in these cases is in fact like seizing a spinning top to catch its motion, or trying to turn up the gas quickly enough to see how the darkness looks.’

‘To see how the darkness looks.’

The closest I can get is to think of it as a gesture — a grand gesture towards the world. It is a kind of openness. Asking means being open for an answer. Asking means waiting to see.

This is too difficult. I must leave it for another time. For now, at least, I have found a way to make the light. It is a simple question, ‘Am I conscious now?’

How can a question work such magic? I wonder what it means to ask a question. Surely a tape recorder blurting out the question a hundred times a day would not have the experience of becoming awake. Would it? Would part of a brain? I suppose that there must be more to it than just saying the words. Indeed, sometimes I repeat them too often and they lose all meaning. They become just a chant; a mantra; a meaningless sequence of sounds. That is not asking the question. So what is? What does it mean to ask a question? Is there some magic in the inquisitive brain?

1 thought on “Am I Conscious Now?”