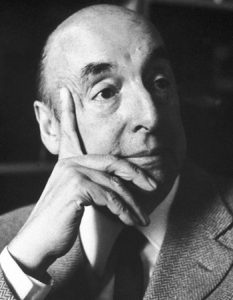 “I need the sea because it teaches me.”

‘In some magnetic way I move in / the university of the waves,’ writes Pablo Neruda in his poetic ode to the sea and the enigma of the human relationship to it as well as to mystery itself. What is this draw that pulls us in to the unknown, shifting ablutions that are the action of the water? Neruda’s poem admits to not knowing even what it is that he is learning , but that the magnetism is palpable all the same, and perhaps then that is the only thing that we can really know as we become a part of the sea’s ‘pure movement.’

I need the sea because it teaches me.
I don’t know if I learn music or awareness,
if it’s a single wave or its vast existence,
or only its harsh voice or its shining
suggestion of fishes and ships.
The fact is that until I fall asleep,
in some magnetic way I move in
the university of the waves.

It’s not simply the shells crunched
as if some shivering planet
were giving signs of its gradual death;
no, I reconstruct the day out of a fragment,
the stalactite from the sliver of salt,
and the great god out of a spoonful.

What it taught me before, I keep. It’s air
ceaseless wind, water and sand.

It seems a small thing for a young person,
to have come here to live with his own fire;
nevertheless, the pulse that rose
and fell in its abyss,
the crackling of the blue cold,
the gradual wearing away of the star,
the soft unfolding of the wave
squandering snow with its foam,
the quiet power out there, sure
as a stone shrine in the depths,
replaced my world in which were growing
stubborn sorrow, gathering oblivion,
and my life changed suddenly:
as I became part of its pure movement.

1 thought on “Pablo Neruda – The Sea”