“If you can look across the distance without wanting to close it up, if you can own your longing in the same way that you own the beauty of that blue that can never be possessed? For something of this longing will, like the blue of distance, only be relocated, not assuaged, by acquisition and arrival.” 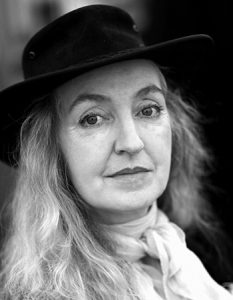 Rebecca Solnit’s A Field Guide to Getting Lost is a collection of essays about love, trust, alienation and place. The lead essay, The Blue of Distance, explores how we can live in uncertainty in relation to our desires and even find beauty in distance and separation. Like in Bluets – Maggie Nelson’s ode to blue – Solnit here pays tribute to the color that fills the space between herself and the object of her longing, and reflects on how this blue can in some ways be understood as love itself.

The world is blue at its edges and in its depths. This blue is the light that got lost. Light at the blue end of the spectrum does not travel the whole distance from the sun to us. It disperses among the molecules of the air, it scatters in water. Water is colorless, shallow water appears to be the color of whatever lies underneath it, but deep water is full of this scattered light, the purer the water the deeper the blue. The sky is blue for the same reason, but the blue at the horizon, the blue of land that seems to be dissolving into the sky, is a deeper, dreamier, melancholy blue, the blue at the farthest reaches of the places where you see for miles, the blue of distance. This light that does not touch us, does not travel the whole distance, the light that gets lost, gives us the beauty of the world, so much of which is in the color blue.

Blue is not in the place those miles away at the horizon, but in the atmospheric distance between you and the mountains.

For many years, I have been moved by the blue at the far edge of what can be seen, that color of horizons, of remote mountain ranges, of anything far away. The color of that distance is the color of an emotion, the color of solitude and of desire, the color of there seen from here, the color of where you are not. And the color of where you can never go. For the blue is not in the place those miles away at the horizon, but in the atmospheric distance between you and the mountains. “Longing,” says the poet Robert Hass, “because desire is full of endless distances.” Blue is the color of longing for the distances you never arrive in, for the blue world. One soft humid early spring morning driving a winding road across Mount Tamalpais, the 2,500-foot mountain just north of the Golden Gate Bridge, a bend reveals a sudden vision of San Francisco in shades of blue, a city in a dream, and I am filled with a tremendous yearning to live in that place of blue hills and blue buildings, though I do live there, I just left there after breakfast, and the brown coffee and yellow eggs and green traffic lights filled me with no such desire, and besides I was there already and was looking forward to going hiking on the mountain’s west slope.

The far seeps in even to the nearest. After all we hardly know our own depths.

We treat desire as a problem to be solved, address what desire is for and focus on that something and how to acquire it rather than on the nature and the sensation of desire, though often it is the distance between us and the object of desire that fills the space in between with the blue of longing. I wonder sometimes whether with a slight adjustment of perspective it could be cherished as a sensation on its own terms, since it is as inherent to the human condition as blue is to distance? If you can look across the distance without wanting to close it up, if you can own your longing in the same way that you own the beauty of that blue that can never be possessed? For something of this longing will, like the blue of distance, only be relocated, not assuaged, by acquisition and arrival, just as the mountains cease to be blue when you arrive among them and the blue instead tints the next beyond. Somewhere in this is the mystery of why tragedies are more beautiful than comedies and why we take a huge pleasure in the sadness of certain songs and stories. Something is always far away.

The mystic Simone Weil wrote to a friend on another continent, “Let us love this distance, which is thoroughly woven with friendship, since those who do not love each other are not separated.” For Weil, love is the atmosphere that fills and colors the distance between herself and her friend. Even when that friend arrives on the doorstep, something remains impossibly remote: when you step forward to embrace them your arms are wrapped around mystery, around the unknowable, around that which cannot be possessed. The far seeps in even to the nearest. After all we hardly know our own depths.

From: A Field Guide to Getting Lost