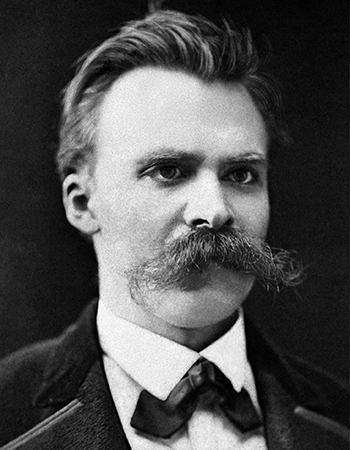 “The person who cannot set himself down on the crest of the moment, forgetting everything from the past, who is not capable of standing on a single point, like a goddess of victory, without dizziness or fear, will never know what happiness is.”

What should we hold on to from the past and what is it good to let go of? That is the question at the heart of German Philosopher Friedrich Nietzsche’s 1870s essay, On the Use and Abuse on History for Life, which he begins by considering a state of mind in which ‘likes and dislikes are closely tied to the peg of the moment’, as is the case most clearly with animals. A being living in the present moment is not held back from the joy of that simple experience by the weight of past experience and the formations of one’s own history. Nietzsche argues that this principle applies at both a personal and societal level, and that the skill required of a person in order to live a happier life is one of knowing the ‘line which divides the observable brightness from the unilluminated darkness’ – essentially, knowing when to remember and when to forget.

Observe the herd which is grazing beside you. It does not know what yesterday or today is. It springs around, eats, rests, digests, jumps up again, and so from morning to night and from day to day, with its likes and dislikes closely tied to the peg of the moment, and thus neither melancholy nor weary. To witness this is hard for man, because he boasts to himself that his human race is better than the beast and yet looks with jealousy at its happiness. For he wishes only to live like the beast, neither weary nor amid pains, and he wants it in vain, because he does not will it as the animal does. One day the man demands of the beast: “Why do you not talk to me about your happiness and only gaze at me?” The beast wants to answer, too, and say: “That comes about
because I always immediately forget what I wanted to say.” But by then the beast has already forgotten this reply and remains silent, so that the man wonders on once more.

But he also wonders about himself, that he is not able to learn to forget and that he always hangs onto past things. No matter how far or how fast he runs, this chain runs with him. It is something amazing: the moment, in one sudden motion there, in one sudden motion gone, before nothing, afterwards nothing, nevertheless comes back again as a ghost and disturbs the tranquillity of each later moment. A leaf is continuously released from the roll of time, falls out, flutters away–and suddenly flutters back again into the man’s lap. For the man says, “I remember,” and envies the beast, which immediately forgets and sees each moment really perish, sink back in cloud and night, and vanish forever.

“The beast lives unhistorically, for it gets up in the present like a number without any odd fraction left over; it does not know how to play a part, hides nothing, and appears in each moment exactly and entirely what it is.”

Thus the beast lives unhistorically, for it gets up in the present like a number without any odd fraction left over; it does not know how to play a part, hides nothing, and appears in each moment exactly and entirely what it is. Thus a beast can be nothing other than honest. By contrast, the human being resists the large and ever increasing burden of the past, which pushes him down or bows him over. It makes his way difficult, like an invisible and dark burden which he can for appearances’ sake even deny, and which he is only too happy to deny in his interactions with his peers, in order to awaken their envy. Thus, it moves him, as if he remembered a lost paradise, to see the grazing herd or, something more closely familiar, the child, which does not yet have a past to deny and plays in blissful blindness between the fences of the past and the future. Nonetheless this game must be upset for the child. He will be summoned all too soon out of his forgetfulness. For he learns to understand the expression “It was,” that password with which struggle, suffering, and weariness come over human beings, so as to remind him what his existence basically is–a never completed past tense. If death finally brings the longed for forgetting, it nevertheless thereby destroys present existence and thus impresses its seal on the knowledge that existence is only an uninterrupted living in the past [Gewesensein], something which exists for the purpose of self-denial, self-destruction, and self- contradiction.

If happiness or if, in some sense or other, a reaching out for new happiness is what holds the living onto life and pushes them forward into life, then perhaps no philosopher has more justification than the cynic. For the happiness of the beast, like that of the complete cynic, is the living proof of the rightness of cynicism. The smallest happiness, if only it is uninterrupted and creates happiness, is incomparably more happiness than the greatest which comes only as an episode, as it were, like a mood, as a fantastic interruption between nothing but boredom, cupidity, and deprivation. However, with the smallest and with the greatest good fortune, happiness becomes happiness in the same way: through forgetting or, to express the matter in a more scholarly fashion, through the capacity, for as long as the happiness lasts, to sense things unhistorically.

“A person who wanted to feel utterly and only historically would be like someone who was forced to abstain from sleep, or like the beast that is to continue its life only from rumination to constantly repeated rumination.”

The person who cannot set himself down on the crest of the moment, forgetting everything from the past, who is not capable of standing on a single point, like a goddess of victory, without dizziness or fear, will never know what happiness is. Even worse, he will never do anything to make other people happy. Imagine the most extreme example, a person who did not possess the power of forgetting at all, who would be condemned to see everywhere a coming into being. Such a person no longer believes in his own being, no longer believes in himself, sees everything in moving points flowing out of each other, and loses himself in this stream of becoming. He will, like the true pupil of Heraclitus, finally hardly dare any more to lift his finger. Forgetting belongs to all action, just as both light and darkness belong in the life of all organic things. A person who wanted to feel utterly and only historically would be like someone who was forced to abstain from sleep, or like the beast that is to continue its life only from rumination to constantly repeated rumination. For this reason, it is possible to live almost without remembering, indeed, to live happily, as the beast demonstrates; however, it is generally completely impossible to live without forgetting. Or, to explain myself more clearly concerning my thesis: There is a degree of insomnia, of rumination, of the historical sense, through which living comes to harm and finally is destroyed, whether it is a person or a people or a culture.

In order to determine this degree of history and, through that, the borderline at which the past must be forgotten if it is not to become the gravedigger of the present, we have to know precisely how great the plastic force of a person, a people, or a culture is. I mean that force of growing in a different way out of oneself, of reshaping and incorporating the past and the foreign, of healing wounds, compensating for what has been lost, rebuilding shattered forms out of one’s self. There are people who possess so little of this force that they bleed to death incurably from a single experience, a single pain, often even from a single tender injustice, as from a really small bloody scratch. On the other hand, there are people whom the wildest and most horrific accidents in life and even actions of their own wickedness injure so little that right in the middle of these experiences or shortly after they bring the issue to a reasonable state of well being with a sort of quiet conscience.

“There is a line which divides the observable brightness from the unilluminated darkness, that we know how to forget at the right time just as well as we remember at the right time, that we feel with powerful instinct the time when we must perceive historically and when unhistorically.”

The stronger the roots which the inner nature of a person has, the more he will appropriate or forcibly take from the past. And if we imagine the most powerful and immense nature, then we would recognize there that for it there would be no frontier at all beyond which the historical sense would be able to work as an injurious overseer. Everything in the past, in its own and in the most alien, this nature would draw upon, take it into itself, and, as it were, transform into blood. What such a nature does not subjugate it knows how to forget. It is there no more. The horizon is closed completely, and nothing can recall that there still are men, passions, instruction, and purposes beyond it. This is a general principle: each living being can become healthy, strong, and fertile only within a horizon. If he is incapable of drawing a horizon around himself and too egotistical to enclose his own view within an alien one, then he wastes away there, pale or weary, to an early death. Cheerfulness, good conscience, joyful action, trust in what is to come–all that depends, with the individual as with a people, on the following facts: that there is a line which divides the observable brightness from the unilluminated darkness, that we know how to forget at the right time just as well as we remember at the right time, that we feel with powerful instinct the time when we must perceive historically and when unhistorically. This is the specific principle which the reader is invited to consider: that for the health of a single individual, a people, and a culture the unhistorical and the historical are equally essential.

Friedrich Nietzsche (1844-1900)
From: The Untimely Meditations