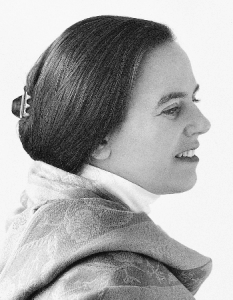 Susan Brind Morrow is an author with an abiding interest in Egyptology, Buddhist scriptures and the nuances of language and metaphor taken from nature. Her book, Wolves & Honey is an account of natural life around the Finger Lakes in New York State and the influence that two men there – a trapper and a beekeeper – had a deep influence on her. In this passage from the chapter titled Bees, Morrow dives into the particulars of beekeeping, ‘the oldest form of agriculture’ and marvels at the symmetry and symbiosis of bees, honeycombs and flowers that invite them in with their colors and smells. She also pays homage to the color blue and the way in which bees perceive shifting patterns of polarized light in what our human eyes see as the solid block-blue of the sky.

In 1910 an ophthalmologist named C. von Hess asserted that fish and all invertebrates were colorblind.

“But I could not believe it,” wrote the biologist Karl von Frisch. “It was easier to believe that a scientist had come to a false conclusion than that nature had made an absurd mistake.”

In 1910 von Frisch began a series of basic empirical experiments with squares of colored cardboard, sugar water, and sheets of cellophane. Over decades of close observation, he came to understand the primary senses of insects, and ultimately cracked the language of bees. In 1973 von Frisch won the Nobel Prize.

Von Frisch saw everywhere the organic significance of color, beginning with the color blue, the blueness of the sky. The sky is blue when the light of the sun is scattered and diffused by the high small particles of the atmosphere. In the blue sky the sun’s light vibrates away from the particles of air at a definite angle, like laundry hanging in the wind. The human eye cannot detect this angling of light; it works like a camera, reproducing the image of what is before it in an approximate condensed way, creating an illusion of solidity, of fixity. But a honeybee sees the blue sky as shifting patterns of polarized light. A honeybee can read the position of the sun at any time by seeing a patch of blue sky.

“Bees see in the blue range, the short end of the color spectrum. A bee sees blues a human being cannot see.”

The eye of the bee is made up of thousands of tiny light receptors, each eight-petaled like a lotus or a rosette, with the light piercing through its center. The perception of light and color differs slightly in each receptor, so that the overall visual effect is multifaceted, fragmented.

The angled light of the sun to such an eye is a map. The honeybee can reproduce that map by dancing, dancing the angles of light. The dancing is contagious. The bees near her learn the dance, dance with her over the combs, and then can read and follow her path through the sky.

Bees see in the blue range, the short end of the color spectrum. A bee sees blues a human being cannot see. To a bee, ultraviolet, the ultraviolet rays reflected back from the petals of a flower, is a vivid color, red is black, and green is gray. Hence (von Frisch concludes) there are few scarlet wildflowers in Europe, no cardinal flowers, for in Europe there are no hummingbirds.

To a bee, a newly opened flower arises from its nest of dull leaves as a vibrant mass of color. The form and fragrance of flowers are not accidental. The yellow streak on the inside of an iris is an arrow, leading the bee in to the hidden pool of nectar at its base.

“One can only imagine the impact of sweetness in the millennia before the refinement of cane sugar: sweetness as something strange, an intoxicant. Hence one can imagine the value of honey: a treasure taken at some cost of pain.”

The iris supplies the nectar for the bee. Nek tar, “that which overcomes death.” As the bee plunges down to the nectar, unfurling her long, red, strawlike tongue, her fur is dusted over with pollen, the protein-rich male seed of the flower. As the bee moves on she inevitably carries the pollen to the female parts of a neighboring flower of the same species, and so enables the fruit to form, the seed to grow, the flower or tree to continue.

“Consider in their entirety,” von Frisch wrote in 1971, “the accomplishments of these small insects, the bees. The more deeply one probes here the greater his sense of wonder, and this may perhaps restore to some that reverence for the creative forces of nature which has unfortunately been lost.”

Honeybees and flowering plants depend on each other and evolved simultaneously, suddenly, sixty million years ago at the end of the Cretaceous, the age of dinosaurs. Beekeeping is sometimes called the earliest form of agriculture. A rock drawing from the Mesolithic in a rock shelter in Spain shows a person reaching into a tree for the honey inside, surrounded by thick black bees. In the other hand the person holds a small vessel, a honey jar.

One can only imagine the impact of sweetness in the millennia before the refinement of cane sugar: sweetness as something strange, an intoxicant. Hence one can imagine the value of honey: a treasure taken at some cost of pain.

Susan Brind Morrow
From: Wolves & Honey: A Hidden History of the Natural World