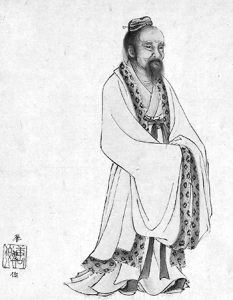 ‘Your life has a limit but your knowledge has none,’ wrote the Chinese master Zhuangzi (also known as Chuang Tzu)  in the 4th century BC. ‘If you use what is limited to pursue what has no limit, you will be in danger.’ Zuangzi’s eponymous book set the philosophical foundations for Taoism in ancient China, the tenets of which have been influential over the years, and informed a lot of the way Buddhism and Zen developed in the country. Zuangzi took care to maintain a humble lifestyle and encouraged all who followed him to break through the boundaries of conditioned and moralistic thinking and tradition in order to experience the reality of their lives directly. In this excerpt from the compilation of his writings translated by Burton Watson, he tells the story of the dexterous Cook Ding who teaches a lord a profound life lesson through the workings of his knife.

Cook Ding was cutting up an ox for Lord Wenhui. As every touch of his hand, every heave of his shoulder, every move of his feet, every thrust of his knee — zip! zoop! He slithered the knife along with a zing, and all was in perfect rhythm, as though he were performing the dance of the Mulberry Grove or keeping time to the Jingshou music.

Cook Ding laid down his knife and replied, “What I care about is the Way, which goes beyond skill. When I first began cutting up oxen, all I could see was the ox itself. After three years I no longer saw the whole ox. And now — now I go at it by spirit and don’t look with my eyes. Perception and understanding have come to a stop and spirit moves where it wants. I go along with the natural makeup, strike in the big hollows, guide the knife through the big openings, and following things as they are. So I never touch the smallest ligament or tendon, much less a main joint.

“A good cook changes his knife once a year — because he cuts. A mediocre cook changes his knife once a month — because he hacks. I’ve had this knife of mine for nineteen years and I’ve cut up thousands of oxen with it, and yet the blade is as good as though it had just come from the grindstone. There are spaces between the joints, and the blade of the knife has really no thickness. If you insert what has no thickness into such spaces, then there’s plenty of room — more than enough for the blade to play about it. That’s why after nineteen years the blade of my knife is still as good as when it first came from the grindstone.

“However, whenever I come to a complicated place, I size up the difficulties, tell myself to watch out and be careful, keep my eyes on what I’m doing, work very slowly, and move the knife with the greatest subtlety, until — flop! the whole thing comes apart like a clod of earth crumbling to the ground. I stand there holding the knife and look all around me, completely satisfied and reluctant to move on, and then I wipe off the knife and put it away.”

“Excellent!” said Lord Wenhui. “I have heard the words of Cook Ding and learned how to care for life!”

3 thoughts on “The Dexterous Butcher – Zhuangzi”