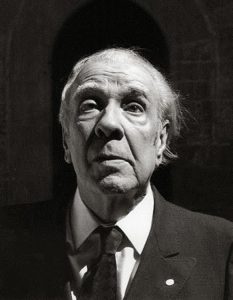 “beyond my anxiety, beyond this writing,
the universe waits, inexhaustible, inviting.”

The Argentine writer and poet Jorge Luis Borges once wrote: “I have always imagined that Paradise will be a kind of library.” Having cited his father’s library as the most significant influence in his life, Borges’ career followed his own passion for reading and rereading tomes and tomes of literature and learning. For such a lover of knowledge, there is a melancholy in the admission that there is a limit to what a person can hold in their brain, and Borges’ own physical limitations, which included the blindness he referred to in this poem, were something he had to make peace with. He asks himself, what reasons moved him to study and to learn long-dead languages, and what good was all that learning as it started to leak out of his aging brain? His response was to consider the deep universal wisdom of his soul and to take refuge in what lies beyond his anxiety and limited endeavors.

Poem Written in a Copy of Beowulf

At various times, I have asked myself what reasons
moved me to study, while my night came down,
without particular hope of satisfaction,
the language of the blunt-tongued Anglo-Saxons.

Used up by the years, my memory
loses its grip on words that I have vainly
repeated and repeated. My life in the same way
weaves and unweaves its weary history.

Then I tell myself: It must be that the soul
has some secret, sufficient way of knowing
that it is immortal, that its vast, encompassing
circle can take in all, can accomplish all.

beyond my anxiety, beyond this writing,
the universe waits, inexhaustible, inviting.