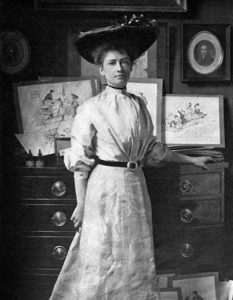 “Pure, unselfish love draws to itself its own; it does not need to seek or demand. Scarcely anyone has the faintest conception of real love.”

Published in 1925, The Game of Life and How to Play It was a trailblazing tome of self-help literature couched in positive thinking and affirmative actions. Florence Scovel Shinn, who was otherwise an illustrator from New Jersey, penned the book, and consecutive publications, with copious anecdotes from her own experiences as a healer, informed by passages from the Bible and theories of human nature and the untapped power of the subconscious. In this passage, she reflects with some insight on what she terms as ‘real and selfless love‘, and the power of making a stable connection with it and acting through it. Her tales frequently take a turn for the miraculous in a way that might appear simplistic or naive, but are illustrative of the prevailing attitude of the New Thought philosophy which formed the base of many enduring movements such as Christian Science.

Real love is selfless and free from fear. It pours itself out upon the object of its affection, without demanding any return. Its joy is in the joy of giving. Love is God in manifestation, and the strongest magnetic force in the universe. Pure, unselfish love draws to itself its own; it does not need to seek or demand. Scarcely anyone has the faintest conception of real love. Man is selfish, tyrannical or fearful in his affections, thereby losing the thing he loves. Jealousy is the worst enemy of love, for the imagination runs riot, seeing the loved one attracted to another, and invariably these fears objectify if they are not neutralized.

For example: A woman came to me in deep distress. The man she loved had left her for other women, and said he never intended to marry her. She was torn with jealousy and resentment and said she hoped he would suffer as he had made her suffer; and added, “How could he leave me when I loved him so much?”

“Perfect yourself on this man. Give him a perfect, unselfish love, demanding nothing in return, do not criticise or condemn, and bless him wherever he is.”

“When you send out real love, real love will return to you, either from this man or his equivalent, for if this man is not the divine selection, you will not want him. As you are one with God, you are one with the love which belongs to you by divine right.”

Several months passed, and matters remained about the same, but she was working conscientiously with herself. I said, “When you are no longer disturbed by his cruelty, he will cease to be cruel, as you are attracting it through your own emotions.”

Then I told her of a brotherhood in India, who never said, “Good morning” to each other. They used these words: “I salute the Divinity in you.” They saluted the divinity in every man, and in the wild animals in the jungle, and they were never harmed, for they saw only God in every living thing. I said, “Salute the divinity in this man, and say, ‘I see your divine self only. I see you as God sees you, perfect, made in His image and likeness.'”

She found she was becoming more poised, and gradually losing her resentment. He was a Captain, and she always called him “The Cap.”

One day, she said, suddenly, “God bless the Cap wherever he is.”

I replied: “Now, that is real love, and when you have become a ‘complete circle,’ and are no longer disturbed by the situation, you will have his love, or attract its equivalent.”

I was moving at this time, and did not have a telephone, so was out of touch with her for a few weeks, when one morning I received a letter saying, “We are married.”

At the earliest opportunity, I paid her a call. My first words were, “What happened?”

“Oh,” she exclaimed, “a miracle! One day I woke up and all suffering had ceased. I saw him that evening and he asked me to marry him. We were married in about a week, and I have never seen a more devoted man.”

So one should become impersonal and learn what each man has to teach him, and soon he would learn his lessons and be free.

The woman’s lover was teaching her selfless love, which every man, sooner or later, must learn.