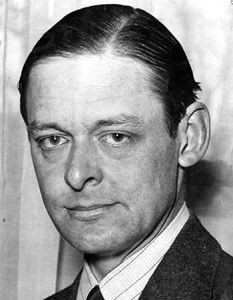 “And you see behind every face the mental emptiness deepen
Leaving only the growing terror of nothing to think about;
Or when, under ether, the mind is conscious but conscious of nothing—
I said to my soul, be still, and wait without hope”

T.S. Eliot’s Four Quartets are four poems written separately between 1936 and 1942, during which time Eliot loosely conceived of them as a series of works structured to echo one another while being grounded in the elements of air, earth, water and fire. Throughout the poems’ long and complex verses that weave through concepts of time and memory, both personal and collective, Eliot embodied a mystical vision sourced from both the east and the west. In this section, the third stanza of the second poem, East Coker, he makes reference to St John of the Cross’ via negativa, a form of Christian mysticism grounded in mediation and invested in the death of the self, especially through the lines at the end that rest on the necessity of a paradoxical approach to charting one’s inner life.

O dark dark dark. They all go into the dark,
The vacant interstellar spaces, the vacant into the vacant,
The captains, merchant bankers, eminent men of letters,
The generous patrons of art, the statesmen and the rulers,
Distinguished civil servants, chairmen of many committees,
Industrial lords and petty contractors, all go into the dark,
And dark the Sun and Moon, and the Almanach de Gotha
And the Stock Exchange Gazette, the Directory of Directors,
And cold the sense and lost the motive of action.
And we all go with them, into the silent funeral,
Nobody’s funeral, for there is no one to bury.
I said to my soul, be still, and let the dark come upon you
Which shall be the darkness of God. As, in a theatre,
The lights are extinguished, for the scene to be changed
With a hollow rumble of wings, with a movement of darkness on darkness,
And we know that the hills and the trees, the distant panorama
And the bold imposing facade are all being rolled away—
Or as, when an underground train, in the tube, stops too long between stations
And the conversation rises and slowly fades into silence
And you see behind every face the mental emptiness deepen
Leaving only the growing terror of nothing to think about;
Or when, under ether, the mind is conscious but conscious of nothing—
I said to my soul, be still, and wait without hope
For hope would be hope for the wrong thing; wait without love,
For love would be love of the wrong thing; there is yet faith
But the faith and the love and the hope are all in the waiting.
Wait without thought, for you are not ready for thought:
So the darkness shall be the light, and the stillness the dancing.
Whisper of running streams, and winter lightning.
The wild thyme unseen and the wild strawberry,
The laughter in the garden, echoed ecstasy
Not lost, but requiring, pointing to the agony
Of death and birth.