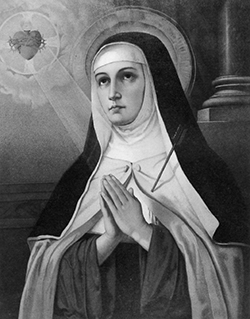 Saint Teresa of Avila was a 16th century Spanish mystic who experienced visions and raptures throughout her life and who emphasized the importance of continuing contemplative, intimate prayer. In this excerpt from her autobiography, she contrasts  material wealth with spiritual riches and uses the metaphor of the shining sun as the source that illuminates that which is unclean and impure within the human soul. The sun, she writes, dazzles and ‘the soul is utterly blinded, absorbed, amazed, dizzy at the vision of so much grandeur. ‘

The soul is weary of the days during which it respected points of honour, and the delusion which led it to believe that to be honour which the world calls by that name; now it sees it to be the greatest lie, and that we are all walking therein. It understands that true honour is not delusive, but real, esteeming that which is worthy of esteem, and despising that which is despicable; for everything is nothing, and less than nothing, whatever passeth away, and is not pleasing unto God. The soul laughs at itself when it thinks of the time in which it regarded money, and desired to possess it,—though, as to this, I verily believe that I never had to confess such a fault; it was fault enough to have regarded money at all. If I could purchase with money the blessings which I possess, I should make much of it; but it is plain that these blessings are gained by abandoning all things.

What is there that is procurable by this money which we desire? Is it anything of worth, and anything lasting? Why, then, do we desire it? A dismal resting place it provides, which costs so dear! Very often it obtains for us hell itself, fire everlasting, and torments without end. Oh, if all men would but regard it as profitless dross, how peaceful the world would be! how free from bargaining! How friendly all men would be one with another, if no regard were paid to honour and money! I believe it would be a remedy for everything.

The soul sees how blind men are to the nature of pleasure—how by means of it they provide for themselves trouble and disquietude even in this life. What restlessness! how little satisfaction! what labour in vain! It sees, too, not only the cobwebs that cover it, and its great faults, but also the specks of dirt, however slight they may be; for the sun shines most clearly; and thus, however much the soul may have laboured at its own perfection, it sees itself to be very unclean, if the rays of the sun fall really upon it. The soul is like water in a vessel, which appears pellucid when the sun does not shine through it; but if it does, the water then is found to be full of motes.

This comparison is literally correct. Before the soul fell into the trance, it thought itself to be careful about not offending God, and that it did what it could in proportion to its strength; but now that it has attained to this state, in which the Sun of Justice shines upon it, and makes it open its eyes, it beholds so many motes, that it would gladly close them again. It is not so truly the child of the noble eagle, that it can gaze upon the sun; but, for the few instants it can keep them open, it beholds itself wholly unclean. It remembers the words: “Who shall be just in Thy presence?” When it looks on this Divine Sun, the brightness thereof dazzles it,—when it looks on itself, its eyes are blinded by the dust: the little dove is blind. So it happens very often: the soul is utterly blinded, absorbed, amazed, dizzy at the vision of so much grandeur.

It is in rapture that true humility is acquired—humility that will never say any good of self, nor suffer others to do so. The Lord of the garden, not the soul, distributes the fruit thereof, and so none remains in its hands; all the good it has, it refers to God; if it says anything about itself, it is for His glory. It knows that it possesses nothing here; and even if it wished, it cannot continue ignorant of that. It sees this, as it were, with the naked eye; for, whether it will or not, its eyes are shut against the things of this world, and open to see the truth.

From: The Autobiography of St Teresa of Avila

1 thought on “Blinded by the Sun – St Teresa of Avila”