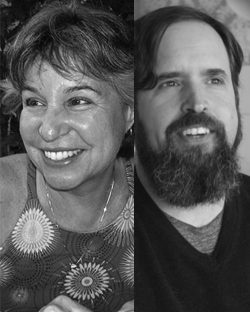 In March 2013, comedian and Podcast host Duncan Trussell broadcast one of the most touching episodes of his show, a conversation with his mother, Deneen Fendig, who was close to death after a long battle with cancer. Fendig, clearly an influence on Trussell’s rambunctiously curious outlook on life, is lucid and uplifting as she talks to her son about the experience of actively dying. In this excerpt, she describes a deepening feeling of ‘holding’  that is pulling her towards ‘something vast’, and which ‘includes everything’. I strongly urge readers to follow the link at the bottom of the page to hear this beautiful exchange in full.

Duncan Trussell: A lot of people say that when they are dying, they begin to feel the presence of people who have already died. Do you feel (your mother’s) presence? Have you begun to have any mystical experiences or a sense of what’s waiting for you?

Deneen Fendig: I don’t have it filled in at all. I sense my mother’s presence, but I also sense these ancestors’ presence. When I started writing my obituary the other day, which was on my list, I realised that I wanted to say that my roots were entwined not only with the oak tree that is going to prohibit me from having any kind of entrance into that soil, but also the roots of the ancestors that had lived there since the 1700s. From both sides of my family, almost everybody has lived in that place and has been buried in that place. And  I feel their welcoming, I feel their gratitude for the various ancestry things that I’ve done for them over the years. For saving their clothes and for finding them interesting, For finding their lives interesting. I have that, which is pretty worldly.

“there is something that I can feel that is gravitationally pulling me out of my body and into something vast.”

I am not one to have icons or images come to me. I’m not a person who sees entities and angelic beings, and that may change, but that hasn’t historically helped me; it’s been more of a distraction. So in terms of seeing beings, I haven’t. But I feel held – first of all held, but more than held; there is something that I can feel that is gravitationally pulling me out of my body and into something vast. That I have, there are no entities involved in that.

DF: It’s a warmth. It has a lot of room to wiggle around in. It has depth, it has depths, darknesses; is it has luminosity. It has other colours depending on whatever it is that I’m grappling with. Because also, you know, in the middle of all of this, not only am I leaving my body and not not only am I being pulled toward some vast mystery, but I’m also trying to reconcile various facets of my life that don’t feel completely reconciled. And when I say held, I mean that those lacks of reconciliation are also held – there’s enough room in that holding to hold the anger and to hold the resentment and to hold the regrets and the anguish of feeling that I never did particularly the highest and most heroic things that I could have done, that I had the capacity to do, that would perhaps have reached more people. It holds all of that.

“I’m becoming bigger. I’m becoming more spread out. I’m finding out that who and what I am is vastness itself, and also an individual.”

DT: And the holding –  does it feel as though it’s releasing you of the regret? Or is it just that it’s allowing all of this to exist at once?

DF: It’s more that it’s an inclusivity. It includes everything. And it it explains to me that judgement is an egoic function and we have been immersed in judgement. We’ve been taught to judge everything. And that what I’m being taught now is to back off from judging my anger, and to back off from judging my regrets, but to let them be part of the manifestation of who I am, and not to give myself hell about it in some kind of moralistic, fundamentalist way.

DT: So it’s as though, as you’re dying, you’re becoming more yourself?

DF: I’m becoming bigger. I’m becoming more spread out. I’m finding out that who and what I am is vastness itself, and also an individual. And it’s the coming together of those two that represents holding.

DT: It’s where the two meet. And I guess I’m just trying to understand, when you say holding or what or who is doing the holding,

DF: Like I said to you, I don’t perceive, I don’t make up in my imagination entities. I find entities to be distracting. So I go deeper than making up mental images of things.

“there is a sense that we are all held. And we don’t realise it. Why don’t we realise it? Because we’ve done so much with our mental conceptualisation that we miss what’s right under our noses.”

Therefore, when I go deeper than the mental, I am immediately in direct knowing, and I can directly know holding, without having to have a picture in my mind of somebody holding me. I think that that would distract me from the experience of holding, which is an ultimately marvellous experience of being held. And being held is inseparable from holding. So there’s a reciprocity, of being held and holding. It’s different from I am a little girl, I’m being held by my mama. It’s not that, but there is a sense that we are all held. And we don’t realise it. Why don’t we realise it? Because we’ve done so much with our mental conceptualisation that we miss what’s right under our noses, what we can directly know through dropping into what our current experience is right now. And if you and everybody who listens to this can do that, what you will find is holding, you don’t have to be dying to find that. It’s a given.

From: MY MOM Part 2 – Episode 64 of The Duncan Trussell Family Hour