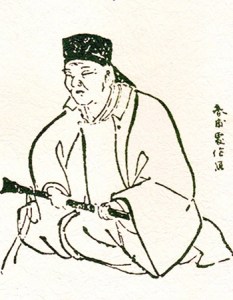 Kobayashi Issa was a haiku poet and a lay Buddhist priest of the Jodo Shinshu sect in Japan. His life was marked by a series of tragedies, including the deaths of three of his children. The following haiku, which was one of over 20,000 that he wrote during his lifetime, was composed following the death of his young daughter. In it, he refers to the popular Zen image of the dewdrop world, the reflection of reality. This image might give us cause to take refuge in the emptiness of things, ‘and yet,’ writes the grieving poet, and the suffering, deluded human; ‘and yet…’

Kobayashi Issa (1763-1828)
Translated by Lewis Mackenzie
From: The Autumn Wind