When romantic love falls apart, literary love keeps a bibliophile going. Lovers come and go but Murakami is always there, waiting on the shelf. 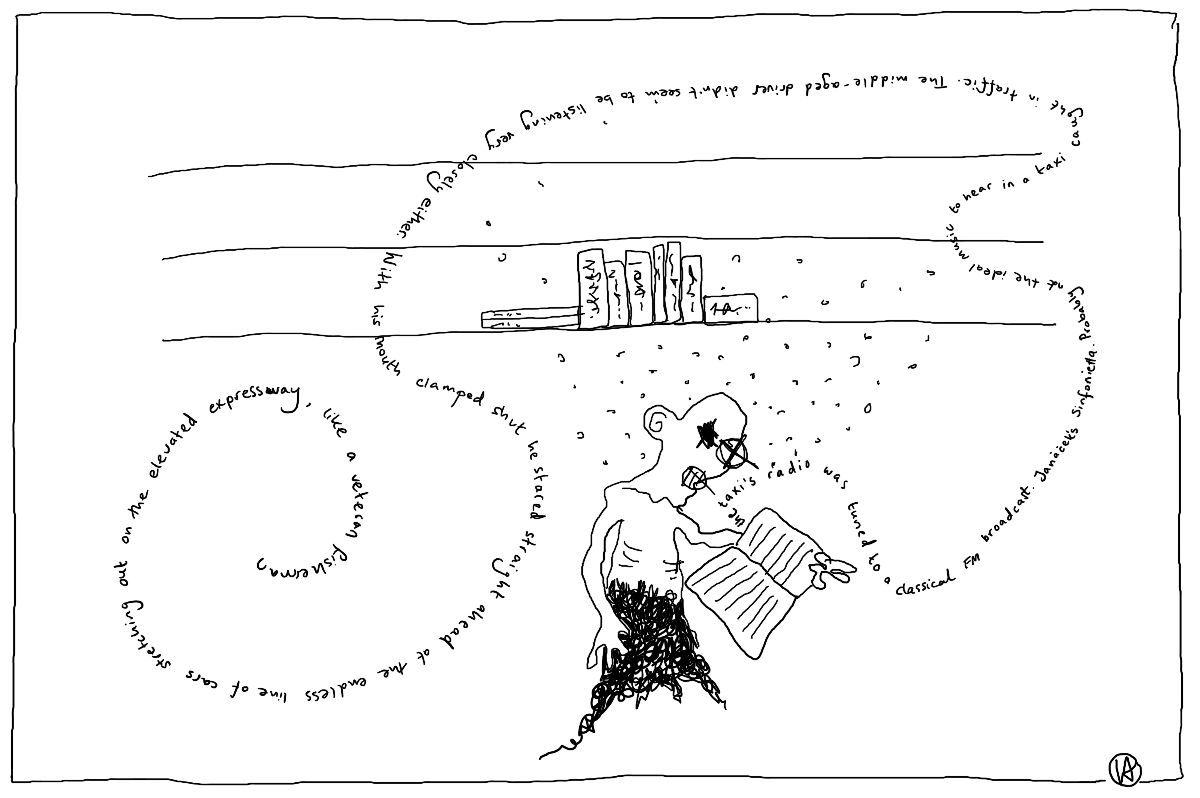 I’VE BEEN READING a lot of books lately. I mean that in several senses, as in, I’ve blasted through handfuls of books over the past few months, and I’ve got about three or four that I’ve been slinking through semi-simultaneously. Simultaneously? I can’t read more than one book at any given time, but as we tend to say, I’m reading a few books at once.

I wasn’t always like this. I used to devote myself to singular novels at a reasonable pace, finishing a whole book before even opening the cover of the next one. A familiar linearity defined my literary escapades. First A, then B. There was always a C waiting on the shelf. One by one the pages flew by, and one by one I added a new book to my mental storehouse. I can’t recall any book word for word, but I’ve got the general gists of hundreds of books catalogued pretty neatly in my head. My point is, things seemed to make sense.

That is, until I read my first Murakami novel.

Some years ago, in a vague space of loneliness and determination, I started a book club. A college book club. I’d like to draw a line connecting the word ‘college’ to the phrase ‘vague space of loneliness and determination,’ but I haven’t the technical know-how to accomplish such a feat. Anyhow, the idea was to get a bunch of literature enthusiasts together to discuss books. At the time, I was in love with one of my good friends. I’m over 30 now, I think I can say sentimental stuff like that and get away with it.

The building we were set to meet in was a weird three-story affair, with two floors visible from the front and the bottommost floor sunk into the ground with sneaky back entrances to exacerbate the strange architecture. I only mention this because a side door exiting the confusing ground floor/second floor of the building opens on a great space for students to stand around, shoot the shit, and smoke like mad. And I only mention the weird bottommost floor because our book club’s first meeting took place there, in a room with small windows set near the ceiling that looked out on the great standing/smoking area. I remember sitting cross-legged on a table at the front of this classroom with Hardboiled Wonderland and the End of the World in my lap as I gazed at my crush through the weird tiny windows. She was smoking. She was beautiful.

One Murakami narrator is 29-going-on-30. All kinds of interesting changes are making his life more dynamic. His marriage dissolves at the beginning of the novel, and he’s ready to abandon the business he’s built up over several years. He finds himself involved in a strange politically-charged detective mission. Life isn’t just a linear number shift for him, and even while most of my birthdays feel like just an inevitable shift, there are things happening in my life that stop it from gathering moss.

I like to think that Murakami could turn the seemingly normal events of my life into a compelling read.

I also like to think that I can relate to many of Murakami’s narrators. Collectively, they tend to be lonely, literary types, who listen to jazz and classical music frequently, who get along well with cats, who drink a metric assload of coffee and alcohol. I don’t hit all these notes, but I hit most of them. I don’t drink all that much, mostly by choice but partly due to medical reasons. Type 1 diabetes makes heavy drinking a potentially more harmful pastime than it already is. I do dig jazz and classical music, and it’s caused me to become embroiled in a long-term love affair with public radio. I say that I’m lonely, but NPR is always there to hold me in its aural embrace. Be careful reading this piece out loud, I don’t know how your friends and family will feel about hearing you say “oral embrace.” I’ve been a cat person all my life. Not to say that I’m half-man, half-cat, but I have enjoyed the presence of cats since I was a kid. As I’ve already stated, I love books, though my introverted tendencies have made it difficult to maintain any kind of permanent connection to the people I end up loving.

As I said before, everything breaks down.

When I fell in love with my friend, I was at the tail-end of a long-term relationship. A lot of things in my life had stagnated, and I was ready to initiate some changes. Just like the aforementioned Murakami narrator, I was in a dissolving marriage. My now ex-girlfriend and I were never married, but sometimes it felt like we were. I felt like staying up till all hours of the night with my new literary friends and talking about everything while they drank, first at a steady pace, then picking up steam like a train commandeered by a villain.

She wanted to go to bed early and wake up early and be a fairly responsible adult. I was jumping on the trampoline of a person I had never met, at two in the morning, and laughing. Probably blushing too.

Emotionally, I was a kid in an adult’s body, and I knew I’d never grow if I didn’t break away.

As the lot of us, my girlfriend at the time and my crush at the time and my small handful of new literature-loving friends, drove to get breakfast the next day, I knew some heavy changes were waiting, hiding in the trunk until I was ready to grab them and use them.

I used to play a lot of video games. My introverted zeal for worlds not my own led me to alternate between virtual realms on the TV screen and virtual realms between book covers. Usually, I’d cycle through my own personal phases: read a bunch of books for a few weeks, then jump back to video games for days on end. As I neared the end of college, however, I got tired of reading. Understandable, I know, but it’s strange to get tired of something you love. Or maybe it’s not, when love becomes routine. Reading so many pages every day, every week, every semester, well – it stifles passion. So I stopped reading for a long while. I started describing my reading life as ‘phases,’ small moments in time when the literary moon broke through the clouds of my ennui and shone like fire in a cave.

Murakami stopped those phases completely. He reminded me of the pleasures of always having a book ready for the relaxation times. Of getting into bed and turning pages until my eyes felt funny. Love became a gentle familiarity, and I was familiar with good stories.

There are ways that I’m dissimilar to Murakami’s narrators too. I’m not Japanese, for one thing. I’ve never mastered the art of riding public transit. I’m not a great cook. I can tell Murakami has cooked a lot, because the way he describes the act of preparing a meal is so down-to-earth. Down-to-counter? It’s just real. I’ve never been embroiled in a violent cosmic event or space-time realignment. At least, not to my knowledge.

Maybe I’ve just been too busy to notice. Just like a Murakami narrator.

I talk and write about Murakami like I’m some kind of expert, but the truth is that I just love what he writes. I’ve made it a goal to work my way through all his books as I continue reading. I don’t want to overdo it and read all of them consecutively, so I buy other books to fill the spaces between Murakami novels. Even though I want to savor each of my Murakami experiences, I end up rushing through each of his books because they’re so compelling.

It’s got me a little worried. There are only so many Murakami novels to go before I reach the end of available material. Then I suppose I’ll move onto his non-fiction, which is only two or three books, if I’m not mistaken, and the short stories. All told, it’s a lot of wonderful stuff. All told, it’s not enough for a lifetime of reading.

But no author is meant to fill one’s whole life. I mean this in the best way possible – good writers imbue our experiences with meanings that we may not have seen before, and they add color to the drab places in our histories. In this way, authors do fill our lives. It’s just, like, I’d have to live a pretty short life if Murakami was the only author I read before I left the back entrance of the bottommost floor.

So I think about that a lot lately. I think about what happens when I run out of Murakami. I think, when I run out of Murakami, I’ll listen to a lot of classical music. I’ll drink a cup of coffee in the morning, and maybe one at night if I’m feeling adventurous. I’ll crack open a hard cider and jot down my thoughts. I’ll read a bunch of other stuff to enrich my existence.

Eventually, I’ll go back to Murakami. Everything changes, and a good reread helps us square our developments with the past. The pages lend our stories a continuity that we forget more often than not.

Chris King writes from the dusty jewel that is Reno, Nevada. He’s inspired by long nights, weird stories, and moving poetry. He tries to turn clever poetic phrases at chrisrking.com.