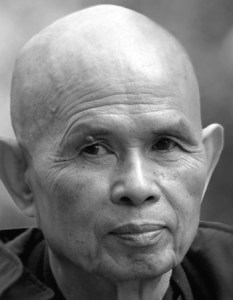 “In Buddhism we do not consider anger, hatred, greed as enemies we have to fight, to destroy, to annihilate. If we annihilate anger, we annihilate ourselves.”

Zen master Thich Nhat Hanh’s emphasis on peace and its primary cultivation in ourselves in the immediate present is at the core of his life’s teaching. He has said, ‘If we are aware of our lifestyle, our way of consuming, our way of looking at things, we will know how to make peace right in the moment we are alive.’ In this excerpt from his book Being Peace – which is a transcript of a series of talks given to peace workers and meditation students – he outlines a tactile, intimate and compassionate approach to anger and offers a concrete way of transforming that anger into a more loving energy.

If I have a feeling of anger, how would I meditate on that? How would I deal with it, as a Buddhist, or as an intelligent person? I would not look upon anger as something foreign to me that I have to fight, to have surgery in order to remove it. I know that anger is me, and I am anger. Non-duality, not two. I have to deal with my anger with care, with love, with tenderness, with nonviolence. Because anger is me, I have to tend my anger as I would tend a younger brother or sister, with love, with care, because I myself am anger, I am in it, I am it. In Buddhism we do not consider anger, hatred, greed as enemies we have to fight, to destroy, to annihilate. If we annihilate anger, we annihilate ourselves. Dealing with anger in that way would be like transforming yourself into a battlefield, tearing yourself into parts, one part taking the side of Buddha, and one part taking the side of Mara. If you struggle in that way, you do violence to yourself. If you cannot be compassionate to yourself, you will not be able to be compassionate to others. When we get angry, we have to produce awareness: “I am angry. Anger is in me. I am anger.” That is the first thing to do.

Because anger is me, I have to tend my anger as I would tend a younger brother or sister, with love, with care, because I myself am anger, I am in it, I am it.

In the case of a minor irritation, the recognition of the presence of the irritation, along with a smile and a few breaths will usually be enough to transform the irritation into something more positive, like forgiveness, understanding, and love. Irritation is a destructive energy. We cannot destroy the energy; we can only convert it into a more constructive energy. Forgiveness is a constructive energy. Understanding is a constructive energy. Suppose you are in the desert, and you only have one glass of muddy water. You have to transform the muddy water into clear water to drink, you cannot just throw it away. So you let it settle for a while, and clear water will appear. In the same way, we have to convert anger into some kind of energy that is more constructive, because anger is you. Without anger you have nothing left. That is the work of meditation.

Earlier I gave the example of a big brother who got angry at his sister at first and then found out that she has a fever, and he understood and became concerned, and he tried to help her. So the destructive energy of anger, because of understanding, is transformed into the energy of love. Meditation on your anger is first of all to produce awareness of anger, “I am the anger,” and then to look deeply into the nature of anger. Anger is born from ignorance, and is a strong ally of ignorance.

Thich Nhat Hanh
From: Being Peace

2 thoughts on “Anger Is Me and I Am Anger”