“Because you love one human being, you see everyone else very differently than you saw them before—perhaps I only mean to say that you begin to see—and you are both stronger and more vulnerable, both free and bound.” 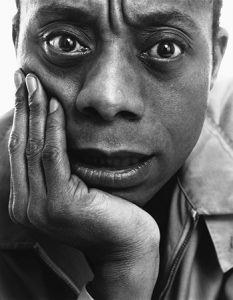 For activist and writer James Baldwin, falling in love was, ‘Not merely the key to my life, but to life itself.’ In this excerpt from his essay Take Me to the Water, featured in the book, No Name in the Street, he talks about falling in love, an event not directly relevant to the narrative, but a powerful force that shaped him and how he interacted with the world. In his childhood, Baldwin suffered at the hands of a tyrannical father and eventually left the United States for France in despair at the intensity of societal inequality at home. In the many essays and novels that he wrote and the activism that he engaged in, Baldwin worked to articulate his subjective experience of race and sexuality, and how that reflected American history and culture. His work often exhibits a nakedness revealed here to be galvanized by love, that ‘bondage which liberates you into something of the glory and suffering of the world.’

Well. Time passes and passes. It passes backward and it passes forward and it carries you along, and no one in the whole wide world knows more about time than this: it is carrying you through an element you do not understand into an element you will not remember. Yet, something remembers—it can even be said that something avenges: the trap of our century, and the subject now before us.

I left home—Harlem—in 1942. I returned, in 1946, to do, with a white photographer, one of several unpublished efforts; had planned to marry, then realized that I couldn’t—or shouldn’t, which comes to the same thing—threw my wedding rings into the Hudson River, and left New York for Paris, in 1948. By this time, of course, I was mad, as mad as my dead father. If I had not gone mad, I could not have left.

I starved in Paris for a while, but I learned something: for one thing, I fell in love. Or, more accurately, I realized, and accepted for the first time that love was not merely a general, human possibility, nor merely the disaster it had so often, by then, been for me—according to me—nor was it something that happened to other people, like death, nor was it merely a mortal danger: it was among my possibilities, for here it was, breathing and belching beside me, and it was the key to life. Not merely the key to my life, but to life itself. My falling in love is in no way the subject of this book, and yet honesty compels me to place it among the details, for I think—I know—that my story would be a very different one if love had not forced me to attempt to deal with myself. It began to pry open for me the trap of color, for people do not fall in love according to their color—this may come as news to noble pioneers and eloquent astronauts, to say nothing of most of the representatives of most of the American states—and when lovers quarrel, as indeed they inevitably do, it is not the degree of their pigmentation that they are quarreling about, nor can lovers, on any level whatever, use color as a weapon. This means that one must accept one’s nakedness. And nakedness has no color: this can come as news only to those who have never covered, or been covered by, another naked human being.

In any case, the world changes then, and it changes forever. Because you love one human being, you see everyone else very differently than you saw them before—perhaps I only mean to say that you begin to see—and you are both stronger and more vulnerable, both free and bound. Free, paradoxically, because, now, you have a home—your lover’s arms. And bound: to that mystery, precisely, a bondage which liberates you into something of the glory and suffering of the world.

From: No Name in the Street

3 thoughts on “On Falling in Love – James Baldwin”