Clifford Venho is this week’s featured poet whose poem Forest of the Unsung, marks the magical transition in a rich and dark forest setting from night into a day that is like ‘a book waiting to be read.’

Forest of the Unsung

The cat prowls
among the stones in the garden,
her footfalls quiet as syllables
sown at dawn;
the night is behind you
and the day lies before you
like a book waiting to be read.
The chickadee jumps from branch
to branch like a word leaping from line
to line across the pages of life.
And the stars dot the night
with holes of light like you
poking through things, looking
for a glimmer of something behind.
The days wear on, but you haven’t
yet heard the song of a new creation
in the dark forest of the unsung.
This music around you—
singing of cicada’s hymn
ditty of a woodpecker—
you hear it patter across your bones. 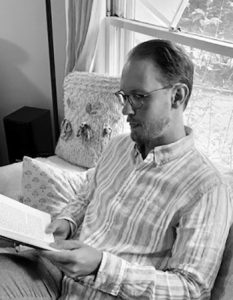 Clifford Venho is a poet, translator, and movement artist. He was born in New York City and studied English and Creative Writing at the State University of New York at New Paltz. His poetry has appeared or is forthcoming in Modern Literature, La Piccioletta Barca, Chronogram Magazine, and elsewhere. His translation of Novalis’ Hymns to the Night was published by Mercury Press in 2015. He is also a translator at Chadwick Library Press, focusing on the translation of works by Austrian philosopher and spiritual thinker Rudolf Steiner. He teaches courses in poetry and the movement art of eurythmy at Eurythmy Spring Valley, where he is a member of the ESV ensemble, which performs for audiences in the U.S. and abroad. He lives with his wife and their orange tabby in a cottage next to the bees.