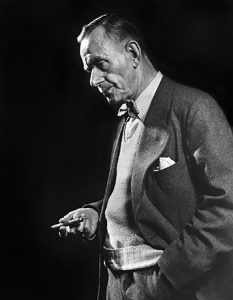 “Has not the cosmological view of the universe, by comparison with its opposite, the psychological, something puerile about it? As I write I think of Albert Einstein’s bright round eyes, like a child’s. I cannot help it.”

Thomas Mann’s Voyage With Don Quixote is an essay written by the German author during a voyage by sea to New York in 1934. The text is a weaving of two main narratives – a diary of the journey and its episodes, which are both challenging and humorous for Mann who is unenthused about the voyage, and a re-reading of Cervantes’ Don Quixote, which Mann chose as his companion novel for the lengthy crossing. This extract from the essay starts with the author’s reflections on the ‘cosmic’ vastness of the ocean he’s cruising, and the naivety inherent in such a sentiment, a naivety that is echoed somehow in Cervantes’ epic novel and the vast contradictions of its legendary leading character. Digging through the satire in Don Quixote, we arrive at a very sincere humanism, and according to Mann, one of the most fascinating things to watch unfold in the novel is Cervantes’ own regard for his project as he increasingly identifies with his ‘cracked but not in the least stupid’ creation.

May twenty-second. So there goes on, with unresting engines, day by day our steady forward push across the great spaces of the ocean. In my bath in the morning, in the warm, sticky, faintly rotten-smelling sea-water, which impregnates my skin with salt and which I dearly love, I remind myself pleasantly that while we slept we have unrolled another large instalment of the endless perspective. The weather is trying to clear up; there is blue sky in sight, beautifying the water with gleams of southern colour. But soon the warmer light has faded again.

We like to stand towards evening on the boat deck with our faces to the wind, watching our course westwards across the ocean’s curve. Always we go toward the setting sun, and our path diverges only the slightest; yesterday we steered straight into the sun, today we are deflected somewhat southwards. The course of a ship like ours through the reaches of water is proud and beautiful; as movement certainly more dignified than the roaring of a train round a curve. The absolute void before us is very striking —on a “stretch” followed by the ships of all seagoing countries. We are now in our fourth day, and so far we have not seen the smoke of a single steamer. The explanation is simple: there is too much room. The spaciousness has something cosmic; no matter how many ships, they lose themselves in it like stars in the sky, and only occasionally does one meet another.

We are coming into strange days, into regions of the earth’s surface that turn round the sun otherwise than those where we have yet dwelt; where it will still be night and we still sleeping when it is bright daylight at home.

Daily the blackboard warns us to set back our watches, from half an hour to forty minutes — yesterday it was thirty-nine. Officially this happens at midnight, but we perform the significant little act soon after dinner, in order that the night may be not all too long, the evening longer. Thus during music and reading do we relive a space in time, which we have already once passed through. It gives us to think, this setting the minute-hand to traverse a segment of time-path for the third time in a day. Ten times thirty-nine minutes is six and a half hours, which we lose—no, gain — on this voyage. Are we then going back in time whilst we press forward in space? Certainly, since our journey is westwards, against the motion of the globe. The word “cosmic,” which I used before, is the only one adequate to the situation. World-space and world-time conceptions are pertinent, forcing themselves upon the consciousness despite all this superficial comfort, which makes light of the elements and seeks to rob them of their life-and-death character. We are coming into strange days, into regions of the earth’s surface that turn round the sun otherwise than those where we have yet dwelt; where it will still be night and we still sleeping when it is bright daylight at home. All this is common knowledge. Yet I debate it with myself afresh. If we were to keep on travelling westwards, so that we returned via the farthest East, we should gain time all the way to the extent of a whole day and a breach in the calendar, and then slowly lose it again till we were where we were before. The same is true in our present case, when we shall not go all the way round but only back to our own continent. And no harm done. For we do not gain a day of life with a day of time. If we should try to impose upon the cosmic order and, having arrived over there, went neither forwards nor back but brooded over our six hours, guarding them as Fafner his hoard, the portion of life organically assigned to us would not be by one second increased.

Human knowledge, research into human life, has a riper, more mature character than speculations about the Milky Way.

What naive reflections! And, after all, has not the cosmological view of the universe, by comparison with its opposite, the psychological, something puerile about it? As I write I think of Albert Einstein’s bright round eyes, like a child’s. I cannot help it. Human knowledge, research into human life, has a riper, more mature character than speculations about the Milky Way — with the profoundest respect I say it. Goethe says: “The individual is free to busy himself with whatever attracts and pleasures him, whatever seems to him of worth; but the true study of mankind is man!”

As for Don Quixote, it is indeed a strange product: naive, unique, arbitrary and sovereign in its contradictions. I cannot but shake my head over the single tales scattered through it, so extravagantly sentimental they are, so precisely in the style and taste of the very productions that the poet had set himself to mock. He crams his hosts of readers full to their hearts’ content with the very diet from which he would wean them — a pleasant cure! In those idylls he resigns his earlier role, as though to say that if the age wanted that sort of thing he could give it them, yes, even be a master at it. But I am not so clear about the position with regard to those humanistic speeches which he sometimes puts in his hero’s mouth; whether he does not thereby distort the character, overstep its limits, and inartistically speak for himself. They are excellent, these speeches; for instance, upon education, and upon the poesy of nature and of art, which the knight in the green mantle gets to hear. They are full of pure reason, justice, human benevolence, and nobility of form, so that he in the green mantle is justly astonished, “and indeed so much that he wavered in his earlier opinion that the man must be foolish.” Quite rightly so, and the reader should waver too.

As for Don Quixote, it is indeed a strange product: naive, unique, arbitrary and sovereign in its contradictions… He crams his hosts of readers full to their hearts’ content with the very diet from which he would wean them — a pleasant cure!

Don Quixote is a bit cracked but not in the least stupid, though the fact was not so clear, even to the author himself, in the beginning. His respect for the creature of his own comic invention grows during the narrative. This process is perhaps the most fascinating thing in the whole novel; it is a novel in itself, waxing proportionately with his regard for his work, which at first he conceived modestly, as a pretty crude and downright satire, without a notion of the extent to which his hero was destined to grow in stature, symbolically and humanly. The change in the point of view permits and even causes a considerable identification of the author with his hero, an inclination to assimilate his intellectual attainments to the author’s own, to make him the mouthpiece of Cervantes’s convictions and to heighten by cultural and intellectual gifts the picturesque charm which, despite his doleful exterior, his own mad idea develops in Don Quixote. It is his master’s elegance of thought and diction that is often the source of Sancho’s boundless admiration — and he is not the only one to be fascinated by it.