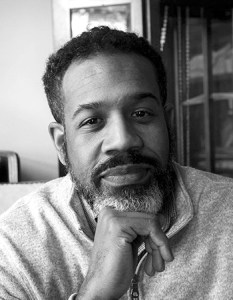 “Beneath the bling of many billion
diodes I walked beside the boy through Times Square
as if anticipating a magic curtain that would rise,
but only one of us would get to take a bow.”

The anxieties of fatherhood and the tension and histories of generational and racial dynamics weave through Gregory Pardlo’s vibrant and dense poem, Raisin. Written with his signature narrative style, the poem tells the story of a man on the verge of fatherhood taking care of a younger cousin whose own father is absent from his life. He takes him to see the show A Raisin in the Sun, Lorraine Hansberry’s classic play about a black family living under segregation in 1950s Chicago. Thinking he can open the play to the boy through the draw of a contemporary pop star, he later finds out that the boy associates Diddy primarily with the story of the assassination of his father. Pardlo plays on the word raisin/raising as he thinks back to his own father who brought him up to have low expectations and ‘dreams deferred’, a reference to the title of the epic poem by Langston Hughes that originally inspired A Raisin in the Sun.

I dragged my twelve-year-old cousin
to see the Broadway production of A Raisin
in the Sun because the hip-hop mogul
and rapping bachelor, Diddy, played
the starring role. An aspiring rapper gave
my cousin his last name and the occasional child
support so I thought the boy would geek to see a pop
hero in the flesh as Walter Lee. My wife was newly
pregnant, and I was rehearsing, like Diddy
swapping fictions, surrendering his manicured
thug persona for a more domestic performance.
My cousin mostly yawned throughout the play.
Except the moment Walter Lee’s tween son stiffened
on stage, as if rapt by the sound of a roulette ball.
Scene: No one breathes as Walter Lee vacillates,
uncertain of obsequity or indignation after Lindner offers
to buy the family out of the house they’ve purchased
in the all-white suburb, Walter might kneel to accept,
but he senses the tension in his son’s gaze. I was thinking,
for real though, what would Diddy do? “Get rich
or die trying,” 50 Cent would tell us. But my father would
sing like Ricky Scaggs, “Don’t get above your raisin’,”
when as a kid I vowed to be a bigger man than him.
That oppressive fruit dropped heavy as a medicine
ball in my lap meant to check my ego, and I imagined
generations wimpling in succession like the conga
marching raisins that sang Marvin’s hit song. Silly,
I know. Outside the theater, my cousin told me
when Diddy was two, they found his hustler dad
draping a steering wheel in Central Park,
a bullet in his head. I shared what I knew of dreams
deferred and Marvin Gaye. (When asked if he loved
his son, Marvin Sr. answered, “Let’s just say I didn’t
dislike him.”) Beneath the bling of many billion
diodes I walked beside the boy through Times Square
as if anticipating a magic curtain that would rise,
but only one of us would get to take a bow.