Peter Spaulding’s Déjà Vu, According to the Matrix starts with the Smiths and a scene from The Matrix, and builds up in layers of playful, random meaning and free-associative lines that run through the poem.

Déjà Vu, According to The Matrix

is whenever the Smiths make a change.
We learned this in 1999
when Neo re-saw the black cat shake,
turning its tail twice on the landing.

Did you see them make the change
when the train lurched backward
five years to just after med school?
You’d seen him again twice,
both times you’d both been thinking
the same thing at the same time,
that while looking at someone else you can find
only the shadowy reflection of yourself
in the other’s glassy eyes.
But neither of you gave breath to the thought,
and you were the same in that.
Had you ever seen the inside of his apartment
that winter or touched the frost that crawled
up the inside of the window,
leaving an indentation of exactly you
that would stay in greasy print long after
the frost would melt into summer,
when the afternoon sun would orange
the print back to life?

The Smiths eclipsed a few of your lives,
and you haven’t even worn leather since 2004.
With a twitch of a trail or the force of a train
derailed, they clipped a thousand
mornings from your view in a heartbeat.
Maybe there are whole Smiths albums
whose lyrics you don’t even know by heart anymore.

There is a black catalogue
that twitches the memory shut,
flickering another world to dust,
and it isn’t backed up in case of failure. 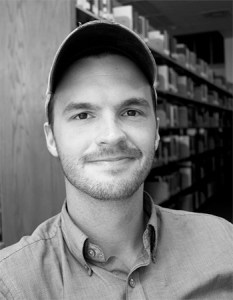 Peter Spaulding is a graduate student at Marquette University and Assistant Editor at Renascence Journal. He is a relatively new writer of poems, but a lifelong aspiring writer. His academic interests are Milton, the English Renaissance, the epic tradition and Christianity, Early Modern and Metaphysical poets, and Shakespeare. He received his M.A. in English literature from Marquette University and B.A. from John Brown University. He has published poems with the Marquette Literary Review, Fathom Magazine, and elsewhere. His non-scholarly interests are generally much more lighthearted: going to Miller Park on warm summer afternoons, listening uncritically and un-ironically to pop music, and taking walks with his wife, Erin.