Andrew Withers’ Beside the Water is one of a series of poems written upon his return home to the UK after two years spent living and working in South East Asia. He writes: ‘Whilst not necessarily addressing or raising the idea of reverse culture shock, it has proven useful to my writing to have seen the UK from afar before then coming home to re-join so many aspects life as if I had never been away.’

A scratch meanders
through the rushes and
blunt axe thumps
drift from downriver.
Two gloves are caught
sodden in the reeds and
a mallard sails into
woodsmoke haze.

Her silhouette still blocks
the doorway and pushes
shade into the hall, and
as the low afternoon
sun merges into the
hills, it grows to darken
the water and my
supine body on
the bank. 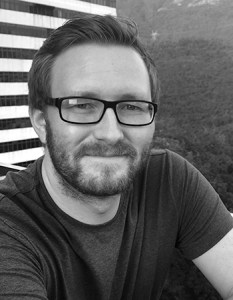 Andrew Withers is 30 years old and hails from the UK. He formerly worked as a teacher in a number of state schools in England and also spent two years living and teaching in Malaysian Borneo. Now living back in the UK he spends his spare time walking, cycling and writing, and believes that gaps, silence and space in poetry can communicate just as much, if not more than metre, figurative devices and expansive lexis.