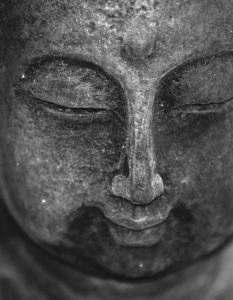 Buddhist thinking about existence and non-existence is characterised by a re-framing of the parameters of the question, to be or not to be? To think in this dualistic way, the Buddha taught, is to have a mistaken perception about reality. This short text, taken from the Samyukta Agama, an early collection of 1,300 Buddhist discourses, is the 301st discourse, titled Discourse on the Middle Way, or the Kacchayana Sutta, after the disciple to whom the teaching is directed. The text, translated by Thich Nhat Hanh, examines the meaning of ‘right view’, namely, the middle way of perception, in which constructs of extremes of do not sway the person who places themselves at the center of being and watches as things and phenomena arise and fall away.

I heard these words of the Buddha one time when the Lord was staying at the guest house in a forest of the district of Nala. At that time, the Venerable Kacchayana came to visit him and asked, “The Tathagata has spoken of Right View. How would the Tathagata describe Right View?”

The Buddha told the venerable monk, “People in the world tend to believe in one of two views: the view of being or the view of nonbeing. That is because they are bound to wrong perception. It is wrong perception that leads to the concepts of being and nonbeing. Kaccayana, most people are bound to the internal formations of discrimination and preference, grasping and attachment. Those who are not bound to the internal knots of grasping and attachment no longer imagine and cling to the idea of a self. They understand, for example, that suffering comes to be when conditions are favorable, and that it fades away when conditions are no longer favorable. They no longer have any doubts. Their understanding has not come to them through others; it is their own insight. This insight is called Right View, and this is the way the Tathagata would describe Right View.

“People in the world tend to believe in one of two views: the view of being or the view of nonbeing. That is because they are bound to wrong perception.”

“How is this so? When a person who has correct insight observes the coming to be of the world, the idea of nonbeing does not arise in her, and when she observes the fading away of the world, the idea of being does not arise in her mind. Kaccayana, viewing the world as being is an extreme; viewing it as nonbeing is another extreme. The Tathagata avoids these two extremes and teaches the Dharma dwelling in the Middle Way.

After listening to the Buddha, the Venerable Kaccayana was enlightened and liberated from sorrow. He was able to untie all of his internal knots and attain Arhatship.

Samyukta Agama, 301
Translated by Thich Nhat Hanh
From: Chanting from the Heart

1 thought on “Avoiding Extremes: Buddha’s Discourse on the Middle Way”