“At the same time that human consciousness is a form of awareness and sensitivity and understanding, it’s also a form of ignorance.” 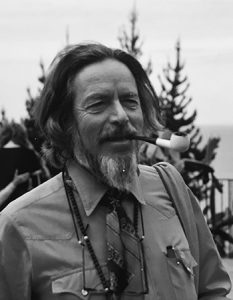 Alan Watts often said that in order to come to your senses, you have to get out of your mind. Throughout his career, the philosopher and self-proclaimed ‘spiritual entertainer’ was emphatic about self-realization and breaking through cultural and psychic barriers in order to live as a fully-fledged, fearless human being. In this extract from his book Out of Your Mind, he talks about the limits of our perceptions, and how we so often neglect to consider what it is that we are leaving out in our understanding of the world.

At the same time that human consciousness is a form of awareness and sensitivity and understanding, it’s also a form of ignorance. Our ordinary, everyday consciousness leaves out more than it takes in—things that are terribly important. For example, it leaves out things that would if we did know them—allay our anxieties and fears and horrors. If we could extend our awareness to those things that we leave out, we would experience a deep inner peace, because we would all know the one thing we aren’t supposed to know. According to one of the rules of our particular social game, you’re simply not allowed to know the lowdown on life. On one hand, lowdown means the real dirt on things, but it also means that which is profound, that which is mysterious, that which is in the depths. And the lowdown is that incredibly important aspect of existence that our everyday consciousness screens out.

Our senses are selective. And we are sensitive only to a small band of sensations, so we’re missing an enormous range of vibrations outside of that band—cosmic rays, ultraviolet rays, gamma rays, and so on. And I’m also referring to what our instruments are capable of detecting—there are even vibrations that escape their notice. The universe is a vast system of vibrations full of infinite possibilities. When you play a harp, you don’t just run your fingers back and forth over all the strings. That makes a terrible sound. You select certain strings in a pattern, you pick out particular notes, and these make a pattern. But at the same time, there are strings you leave out and notes you don’t play in the fundamental continuity of the harp.

“Deep down—who are you? Because that’s the thing we’ve all missed, the thing that’s been forgotten, the thing we left out—the underside of the tapestry.”

So what have you left out? That’s an absolutely basic question for all of us. You are focused on certain things that constitute what you think of as everyday reality. You single out certain people, certain aspects of buildings, pieces of landscape, parts of the sky, and you actually see the world as a collection of rather disjointed things and events. But you left something out-you forgot something. I’m not talking about your pants or your wig or your glasses, but something absolutely essential. Everyone has forgotten it. And one way to rediscover that thing is through asking the question, “Who are you?”

In response, you might say, “Well, I’m Paul Jones,” or whatever your name happens to be. And if I push the issue and say, “No, no, no. Don’t give me that stuff. Who are you really?” you might take offense or think I’m talking nonsense or playing some kind of trick on you. But really, deep down—who are you? Because that’s the thing we’ve all missed, the thing that’s been forgotten, the thing we left out—the underside of the tapestry.

“What we are all carefully taught to ignore is that every one of us is an act, a function, a performance, a manifestation of the entire cosmos—what you might call God or Brahman or the Tao.”

What we are all carefully taught to ignore is that every one of us is an act, a function, a performance, a manifestation of the entire cosmos—what you might call God or Brahman or the Tao. Every one of us is actually that, but we are pretending with tremendous skill and deception that we’re not. Now, where it’s really at is living on two levels at once. If you live the life of your ordinary ego and play your role in life and observe all your particular rules and so on, while at the same time understanding the lowdown, you see the big picture. Then you’re what I call a really swinging human being.

But most of us just live on the ordinary level and think that’s all there is. So life becomes a drag and we feel we must survive and we work and work at surviving and our children inherit the very same attitude. And nobody has any fun because we’re just compulsively trying to get through it all and go on. And people get fed up, you know, and feel like they can’t live this way, and some decide to check out and commit suicide. Well, that makes sense in a way. With that attitude toward life, who wants to feel like they have to go on living?

“The Taoist word for nature means “of itself so”—that is, nature is spontaneous. You don’t have to force it; it just happens.”

Of course, life doesn’t have to be that way. Not at all. Life can be quite joyful and spontaneous. The Taoist word for nature means “of itself so”—that is, nature is spontaneous. You don’t have to force it; it just happens. I once attended a lecture in New York given by a Zen master I knew. The whole production was quite formal—he was dressed in gold ceremonial robes and sat in front of an altar with candles and a formal little desk for the scriptures. The master was lecturing from a particular sutra to a group of very pious Western devotees. He said, “The fundamental principle in Buddhism is no purpose. Purposelessness. When the Buddha needed to fart, he didn’t say, ‘At nine o’clock, I’m going to drop a fart.’ The fart just happens by itself.”

From: Out of Your Mind

1 thought on “What Have You Left Out? Alan Watts on the Limits of Perception”