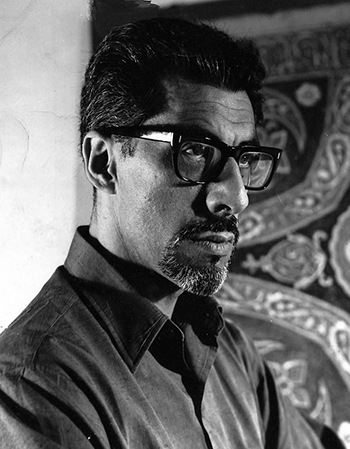 “The function of the teacher is to open the mind of the Seeker, so that he may become accessible to a recognition of his destiny. In order to do this, man must realize how much of his ordinary thinking is cramped by assumptions.”

Traditions such as Sufism and Zen put special importance on the teacher-student relationship, recognizing that some measure of guidance is essential in order to clarify the path being followed. In this extract from his book, The Sufis, Sufi teacher and author Idries Shah compares the kind of trust we put in a teacher to that we would assign to a surgeon or a craftsman. It is not the teacher’s role to dictate, rather to open their mind and help them unlearn a lot of their conditioning and existing habits of the mind. He adds that this relationship is not necessary rational, and that the connection between the teacher often happens by ‘intuitive recognition.’

Almost all human beings are reared with some measure of self-reliance, which becomes a habit of thought. Through a quite natural lack of true reasoning, the idea of accepting guidance becomes confused with a loss of freedom. Most people — in East and West alike — do not realize that putting oneself in the hands of an expert implies no loss of personal importance. Inconsistently, they will allow a surgeon to remove their appendixes, but will dispute the superior knowledge or experience of a teacher in a field in which they are as ignorant as in surgery.

Since the Sufis do not preach or try to attract followers, material relating to the approach to a teacher is only found in the statements of developed Sufis, and generally not from those who are themselves teachers. “You go to the priest,” says one, “from habit or belief, and because he affirms certain things. You visit the doctor because you have been recommended to him, or because you have a sense of urgency or desperation. You frequent the company of magicians because of an inner weakness; the swordsmith because of an outer strength; the shoemaker because you have seen his wares and want to possess yourself of some. Do not visit the Sufi unless you want to benefit, for he will drive you forth if you start to dispute.”

The Sufi belief is that the attraction of a Sufi teacher is essentially because of intuitive recognition; the reasons which the would-be Sufi gives are secondary, rationalization. One Sufi says, “I knew the master was a great and good man before I met him. But only when he brought enlightenment to me did I realize his greatness and goodness to be of a far greater order, far beyond my initial capacity to understand.”

The uncritical carry-over of the sense of self-reliance into fields where it does not in fact operate is illustrated in this autobiographical fragment from a Sufi: “I resolved that I should tread the mystic Path alone, and struggled to do so, until an inner voice said to me, ‘You go to a pathfinder to show you a road through a wilderness — or will you prefer to seek your own way and destroy yourself in the process?'”

While some Sufic faculties may develop spontaneously, the Sufi personality cannot mature in solitude, because the Seeker does not know exactly which way he is heading, in which order his experiences will come. He is at the beginning subject to his own weaknesses, which influence him, and from which a teacher “shields” him. For this reason Sheikh Abu al-Hasan Saliba said: “Better place a disciple under the control of a cat than under his own control.” Just as a cat’s impulses are varying and uncontrollable, so are those of the would-be Sufi at an early stage.

This parallel of unregenerate man as largely animal, endowed with faculties which he cannot yet properly use, is frequent in Sufi teaching: “The more animal the man, the less he understands of teachership. To him the Guide may seem like the hunter, requiring him to enter a cage. I was like this,” states Aali-Pir. “The untrained hawk thinks that if he is captured, as he calls it, he will be enslaved. He does not realize that the hawkmaster will give him a fuller life, perched freely on the wrist of the King, without the perpetual preoccupations of food and fear. The only difference between human and animal here is that the animal fears everyone. The human claims that he is assessing the reliability of the teacher. What he is really doing is smothering his intuition, his inclination to place himself in the hands of one who knows the Way.”

“The Sufi pattern of words, action, and cooperation requires three things: the teacher, the learner, and the community or school.“

There is, again, an interaction between the teacher and the taught, which can hardly exist if there is no teacher. The Sufi pattern of words, action, and cooperation requires three things: the teacher, the learner, and the community or school. Rumi refers to this complex of activity when he says:

“Science is learned by words; art by practice; detachment by companionship.”

And, since the very manner of learning must itself be learned, Rumi says in another place: “That which is a stone to the ordinary man is a pearl to him who knows.”

The function of the teacher is to open the mind of the Seeker, so that he may become accessible to a recognition of his destiny. In order to do this, man must realize how much of his ordinary thinking is cramped by assumptions. Until this point is reached, true understanding is impossible, and the candidate is only fit for one or another of the more usual human organizations which train him to think along certain lines: “Open the door of your mind to the waif of understanding; for you are poor and it is rich” (Rumi).