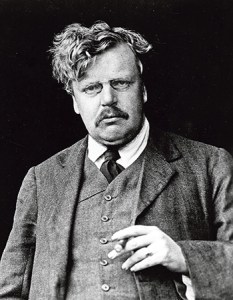 “And all these things are less than dust to me
Because my name is Lazarus and I live.”

G.K. Chesterton, of whom T.S. Eliot wrote that ‘he was importantly and consistently on the side of the angels,’ was a writer and philosopher from the post-Victorian era in the UK who underwent a conversion to Catholicism in his late-40s. His poem, The Convert describes the aftermath of an epiphany, a transition that has taken the poet from an upside-down world onto a shining white road of peace and clarity, a state in which ‘old riddles and new creeds’ elicit a softness, ‘as men smile about the dead.’ The reasoning of sages and rattle like gold passing through as sieve, and in the mind of the convert, even this gold is dust, struck through by the last, powerful line of the poem that declares the gentle cataclysm of spiritual rebirth: ‘my name is Lazarus and I live.’

After one moment when I bowed my head
And the whole world turned over and came upright,
And I came out where the old road shone white.
I walked the ways and heard what all men said,
Forests of tongues, like autumn leaves unshed,
Being not unlovable but strange and light;
Old riddles and new creeds, not in despite
But softly, as men smile about the dead

The sages have a hundred maps to give
That trace their crawling cosmos like a tree,
They rattle reason out through many a sieve
That stores the sand and lets the gold go free:
And all these things are less than dust to me
Because my name is Lazarus and I live.

2 thoughts on “G.K. Chesterton – The Convert”