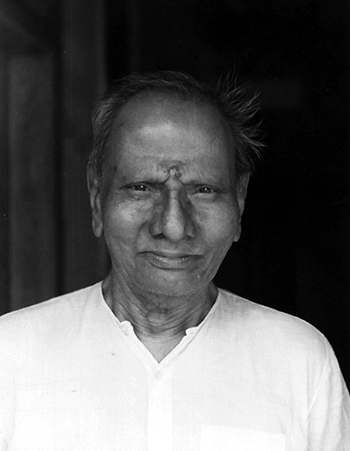 “In the absence of a body, do you, and did you, exist? Are you, and were you, there or not? Attain that state which is and was prior to the body. Your true nature is open and free, but you cover it up, you give it various designs.”

Sri Nisargadatta Maharaj was a humble shopkeeper in Mumbai who gave profound teachings around his own insight into non-duality and the very essence of being. He repeatedly encouraged his students to make a study of their own being and consciousness, and the very immediate and wordless experience of ‘I Am.’ Identifying with this consciousness rather than with the individuated state of the body, he said, was the path to that led to the source of all things. In this excerpt from a book of some of his final talks and teachings, Nisargadatta talks about the expansion of spiritual consciousness through practice, and the very practical way in which the student can start on the path, namely, by coming back to their body and their breath.

Maharaj: I have no individuality. I have assumed no pose as a person. Whatever happens in the manifest consciousness happens.

In meditation, one sees a lot of visions. They are in the chemical, the realm of your consciousness, are they not? All these things are connected only to that birth-chemical. You are not this chemical “I Am”!

Spiritual knowledge should not be studied; it is knowledge derived from listening. When the listener hears it, and accepts it, something clicks in him.

This “I Amness” is otherness; it is an expression of duality.

Questioner: Why is it that we naturally seem to think of ourselves as separate individuals?

Maharaj: Your thoughts about individuality are really not your own thoughts; they are all collective thoughts. You think that you are the one who has the thoughts; in fact thoughts arise in consciousness.

As our spiritual knowledge grows, our identification with an individual body-mind diminishes, and our consciousness expands into universal consciousness. The life force continues to act, but its thoughts and actions are no longer limited to an individual. They become the total manifestation. It is like the action of the wind – the wind doesn’t blow for any particular individual, but for the total manifestation.

Questioner: As an individual can we go back to the source?

Maharaj: Not as an individual; the knowledge “I Am” must go back to its own source.

Now, consciousness has identified with a form. Later, it understands that it is not that form and goes further. In a few cases it may reach the space, and very often, there it stops. In a very few cases, it reaches its real source, beyond all conditioning.

It is difficult to give up that inclination of identifying the body as the self. I am not talking to an individual, I am talking to the consciousness. It is consciousness which must seek its source.

Out of that no-being state comes the beingness. It comes as quietly as twilight, with just a feel of “I Am” and then suddenly the space is there. In the space, movement starts with the air, the fire, the water, and the earth. All these five elements are you only. Out of your consciousness all this has happened. There is no individual. There is only you, the total functioning is you, the consciousness is you.

You are the consciousness, all the titles of the Gods are your names, but by clinging to the body you hand yourself over to time and death–you are imposing it on yourself.

In the absence of a body, do you, and did you, exist? Are you, and were you, there or not? Attain that state which is and was prior to the body. Your true nature is open and free, but you cover it up, you give it various designs.

Maharaj: The “I Amness”, the manifest Brahman, and Isvara are all only one; ponder over this and realize it. This is a rare opportunity, one where all has been explained in great detail, so take full advantage of it.

You are the manifest Brahman. I have told you many times what your true state is, but, through force of habit, you again descend into body identification. A stage has now arrived at which you must give up this bodily identification. The bodily activities will continue until the body drops off, but you should not identify with them.

Questioner: How are we to do this?

Sri Nisargadatta Maharaj (1897-1981)
From: Consciousness and the Absolute