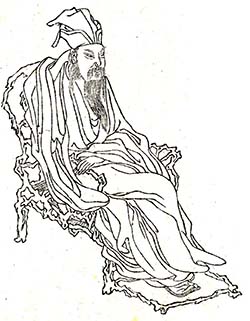 Su Tung-P’o was a poet of the Song era who is also known as Su Shi, and who published under the name Dongpo Jushi. A prolific figure of his time, Su Tung-P’o was a statesman who was accomplished not only in literary terms, but also as a painter, calligrapher and cook. Influenced by his study of Buddhism and Confucianism, his poems often got him in hot water with the ruling elite. This poem, like many poems of the Song era, is lyrical and written to be sung out loud to the tune stated in the title.

I grow old, my talents are used up
but still I plot toward the return
to find a field and take a cottage
where I can laugh at heroes
and pick my way among the muddy puddles
on a lake side path

From: A Drifting Boat