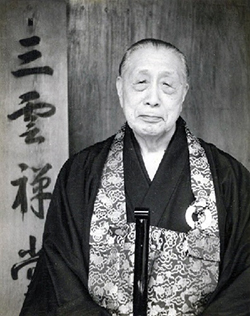 This famous koan from the Mumonkan or The Gateless Gate, tells the story of Nansen killing a cat that a group of monks were arguing over in a monastery, an action that elicited a bizarre response from another monk, Joshu. This particular translation of the koan comes from Koun Yamada’s book of teachings on the Gateless Gate, and includes his own commentary on the koan. His take is that the cat itself is ‘the symbol of the origin from which all relative thought arises’ and that in killing the cat, Nansen is cutting off the origin of delusion.

Once the monks of the eastern and western Zen halls in Master Nansen’s temple were quarrelling about a cat. Nansen held up the cat and said, “You monks! If one of you can say a word, I will spare the cat. If you can’t say anything, I will put it to the sword.” No one could answer, so Nansen finally slew it. In the evening when Joshu returned, Nansen told him what had happened. Joshu thereupon took off his sandals, put them on his head, and walked off. Nansen said, “If you had been there, I could have spared the cat.”

As you know, Zen dislikes abstract concepts. It does not use definite labels or words, for they tend to bring about fixed notions, and the true life of things is lost. In order to prevent this, Zen takes anything at hand and tries to express the essential nature through that object — a dog, a cat, a tree, a fox, a finger — anything will do. In this case, it is a cat. Now, what does the cat mean? It is the symbol of the origin from which all relative thought arises. All thoughts that come from the premise of the opposition of the subject and object are delusions. To kill the cat means to cut off the origin of all delusive thoughts. This is precisely what Nansen did.

Joshu was away when all this happened and did not return to the monastery until evening. Nansen told him what had taken place and probably asked him, “What do you think about it?” Joshu put his sandals on his head and walked away.

Joshu, of course, was deeply enlightened and had swept away not only all delusive thoughts but also all remembrance of enlightenment. He had no ideas, no concepts, not even a trace of enlightenment. He was a truly emancipated man, who presented the inner world of his consciousness to Nansen. The latter showed his approval by his reply, “If you had been there, I could have spared the cat.”

If you try to imagine what Joshu was saying in his heart, it might be: “Master, you are talking about killing a cat, but I don’t understand what you mean. Now I must go.” But this is only our imagination. In Joshu’s heart there was nothing, not even thoughts such as these. He did not say a word. By his action alone he showed his state of consciousness and gave the master his answer to the koan. In that action there was no discriminative thinking, not even the thought that sandals belong on the feet and not the head. But I do not want you to think that wearing sandals on your head is characteristic of Zen! If your thinking is like that, then you are on the fox level. As I said before, our aim in Zen is not to become strange or peculiar but to become a true person. Nansen’s sword kills everything, and Joshu gives everything life. They represent the two sides of Zen activity. One side, represented by Nansen, extinguishes or cuts off delusions which arise fundamentally from opposing subject and object. The significance of this is to cut off all evil. There is a Zen saying, “There is not even a grain of dust in the essential world.”

The other side of Zen activity is to give life to everything. Joshu presents this side uniquely by his extraordinary action. Its significance is to practice all good. There is a Zen saying, “Nothing remains outside the Buddha’s Dharma.” In order to promote man’s spiritual advancement, both are indispensable.

From – The Gateless Gate: The Classic Book of Zen Koans