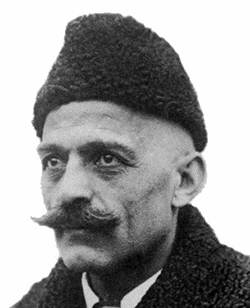 George Ivanovitch Gurdjieff was a mystic and a spiritual teacher of Armenian descent whose philosophy and insight are often quite difficult to initially grasp, but who nonetheless left a significant mark in 20th century western spirituality. Gurdjieff’s chief hypothesis was that man lived in a perpetual state of ‘sleep’ and could only utilize his full capacity by undertaking a rigorous path to awakening which he designed called ‘The Work’ that united the energies of the emotions, body and mind. The text below is taken from a book of his early talks and in it he sketches a picture of the two rivers of human, life, the two possibilities or states of being available to man: the passive and the active. We are all, he says, born into the stream of passivity, but that does not mean that one cannot jump from one stream to the other, even though such a transition is a very difficult proposition.

It will be useful if we compare human life in general to a large river which arises from various sources and flows into two separate streams, that is to say, there occurs in this river a dividing of the waters, and we can compare the life of any one man to one of the drops of water composing this river of life.

On account of the unbecoming life of people, it was established for the purposes of the common actualizing of everything existing that, in general, human life on the Earth should flow in two streams. Great Nature foresaw and gradually fixed in the common presence of humanity a corresponding property, so that, before the dividing of the waters, in each drop that has this corresponding inner subjective “struggle with one’s own denying part,” there might arise that “something,” thanks to which certain properties are acquired which give the possibility, at the place of the branching of the waters of life, of entering one or the other stream.

Thus there are two directions in the life of humanity: active and passive. Laws are the same everywhere. These two laws, these two currents, continually meet, now crossing each other, now running parallel. But they never mix; they support each other, they are indispensable for each other.

It was always so and so it will remain.

Now, the life of all ordinary men taken together can be thought of as one of these rivers in which each life, whether of a man or of any other living being, is represented by a drop in the river, and the river in itself is a link in the cosmic chain.

In accordance with general cosmic laws, the river flows in a fixed direction. All its turns, all its bends, all these changes have a definite purpose. In this purpose every drop plays a part insofar as it is part of the river, but the law of the river as a whole not extend to the individual drops. The changes of movement and direction of the drops are completely accidental. At one moment a drop is here; the next moment it is there; now it is on the surface, now it has gone to the bottom. Accidentally it rises, accidentally it collides with another and descends; now it moves quickly, now slowly. Whether its life is easy or difficult depends on where it happens to be. There is no individual law for it, no personal fate. Only the whole river has a fate, which is common to all the drops. Personal sorrow and joy, happiness and suffering—in that current, all these are accidental.

But the drop has, in principle, a possibility of escaping from this general current and jumping across to the other, the neighboring, stream.

This too is a law of Nature. But, for this, the drop must know how to make use of accidental shocks, and of the momentum of the whole river, so as to come to the surface and be closer to the bank at those places where it is easier to jump across. It must choose not only the right place but also the right time, to make use of winds, currents and storms. Then the drop has a chance to rise with the spray and jump across into the other river.

From the moment it gets into the other river, the drop is in a different world, in a different life, and therefore is under different laws. In this second river a law exists for individual drops, the law of alternating progression. A drop comes to the top or goes to the bottom, this time not by accident but by law. On coming to the surface, the drop gradually becomes heavier and sinks; deep down it loses weight and rises again.

To float on the surface is good for it—to be deep down is bad. Much depends here on skill and on effort. In this second there are different currents and it is necessary to get into river required current. The drop must float on the surface as possible in order to prepare itself, to earn the possibility of passing into another current, and so on.

At the same time Nature has given us the possibility of escaping from this slavery. Therefore when we talk about freedom we are talking precisely about crossing over into the other river.

But of course it is not so simple—you cannot cross over merely because you wish. Strong desire and long preparation are necessary. You will have to live through being identified with all the attractions in the first river. You must die to this river. All religions speak about this death: “Unless you die, you cannot be born again.”

This does not mean physical death. From that death there is no necessity to rise again because if there is a soul, and it is immortal, it can get along without the body, the loss of which we call death. And the reason for rising again is not in order to appear before the lard God on the day of judgment as the fathers of the Church teach us. No, Christ and all the others spoke of the death which can take place in life, the death Of the tyrant from whom our slavery comes, that death which is a necessary condition of the first and principal liberation of man.

This would be the death of “I”, the death of everything it consisted of, the destruction of everything false collected through ignorance or inexperience. All this will remain in him merely as material, but subject to selection. Then a man will be able to choose for himself and not have imposed on him what others like. He will have conscious choice.

This is difficult. No, difficult is not the word. The word “impossible” is also wrong, because, in principle, it is possible; only it is a thousand times more difficult than to become a multimillionaire through honest work.

From: Views from the Real World

1 thought on “Gurdjieff and The Two Rivers”