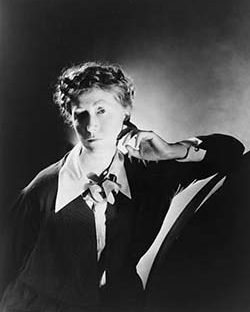 Poet Marianne Moore once said, ‘Poetry watches life with affection,’ a sentiment echoed in her poem Black Earth, which featured in a 1924 collection called Observations. In the poem, Moore imagines herself – affectionately – as an elephant, with thick skin ‘cut into checkers by rut upon rut of unpreventable experience’ that conceals the ‘beautiful element of unreason.’ ‘I do these things which I do,’ she writes, ‘which please no one but myself.’ TS Elliot said of Moore that she ‘expanded language’ with her work, while Brain Pickings’ Maria Popova called her the Oliver Sacks of poetry.

Openly, yes,
With the naturalness
Of the hippopotamus or the alligator
When it climbs out on the bank to experience the

Sun, I do these
Things which I do, which please
No one but myself.  Now I breathe and now I am sub-
Merged; the blemishes stand up and shout when the object

In view was a
Renaissance; shall I say
The contrary?  The sediment of the river which
Encrusts my joints, makes me very gray but I am used

To it, it may
Remain there; do away
With it and I am myself done away with, for the
Patina of circumstance can but enrich what was

There to begin
With.  This elephant skin
Which I inhabit, fibered over like the shell of
The coco-nut, this piece of black glass through which no light

Hairy toed.  Black
But beautiful, my back
Is full of the history of power.  Of power? What
Is powerful and what is not?  My soul shall never

Be cut into
By a wooden spear; through-
Out childhood to the present time, the unity of
Life and death has been expressed by the circumference

Described by my
Trunk; nevertheless, I
Perceive feats of strength to be inexplicable after
All; and I am on my guard; external poise, it

Has its centre
Well nurtured—we know
Where—in pride, but spiritual poise, it has its centre where ?
My ears are sensitized to more than the sound of

The wind.  I see
And I hear, unlike the
Wandlike body of which one hears so much, which was made
To see and not to see; to hear and not to hear,

That tree trunk without
Roots, accustomed to shout
Its own thoughts to itself like a shell, maintained intact
By who knows what strange pressure of the  atmosphere; that

Spiritual
Brother to the coral
Plant, absorbed into which, the equable sapphire light
Becomes a nebulous green.  The I of each is to

The I of each,
A kind of fretful speech
Which sets a limit on itself; the elephant is?
Black earth preceded by a tendril?  It is to that

Phenomenon
The above formation,
Translucent like the atmosphere—a cortex merely—
That on which darts cannot strike decisively the first

Time, a substance
Needful as an instance
Of the indestructibility of matter; it
Has looked at the electricity and at the earth-

Quake and is still
Here; the name means thick.  Will
Depth be depth, thick skin be thick, to one who can see no
Beautiful element of unreason under it?