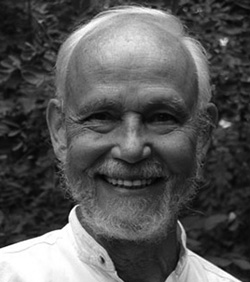 “The larger the island of knowledge, the longer the shoreline of wonder,” wrote Huston Smith, one of the 20th centuries most prominent scholars of world religion in his book, Beyond a Post-Modern Mind. And it’s wonder that primarily comes across in his autobiography called Tales of Wonder: Adventures Chasing the Divine, in which he gives an intimate account of his life – which began in China – exploring various facets of global religion, including Vedanta, Zen and Sufism. In this excerpt from his autobiography, he talks about his own relationship to psychic experience, which as a phenomenon was very much in vogue during certain periods of the 20th century. Below, he lovingly tells the story of his wife, who he claimed had a ‘talent’ in the area, and her experience of the ‘ultimate reality’ in Death Valley which in turn informed and inspired Huston in his investigations.

Personally I have no talent in the psychic area. In 1984, however, I witnessed the ultimate kind of psychic experience, one that changed my understanding of our relationship to “nature.” Kendra and I were staying in Death Valley, the lowest geographic point in the United States. In the night she woke up and felt compelled to go outside. The desert, she later told me, seemed to be calling her; it somehow required her. She walked and walked until she lost awareness of herself in that vast and dark-lit space. She felt that nothing separated her from the desert; that they were one thing assuming different shapes. If I search for a metaphor for Kendra’s experience, it was like wallpaper being slicked onto a wall: she was a tissue-thin sheet plastered onto an environment without end.

“That night in Death Valley seemed to Kendra like “ultimate reality”; she was, it seemed, in a world beyond momentary appearances.”

That night in Death Valley seemed to Kendra like “ultimate reality”; she was, it seemed, in a world beyond momentary appearances. My good friend Ann Jauregui says that such experiences are not rare, although most people forget or attach no importance to them. Ann told me about hers, when she was a young girl in Michigan. In summer she would lie on a wooden raft anchored in the bay, listening to the waters lapping, drowsy in the warm sunshine. The warm day, the clear northern light, and the water’s gentle motion together worked a semi-hypnotic effect. Then suddenly Ann would snap alert and feel intensely alive, or rather that everything was alive and she was part of it. The rocks, the rowboats on the shore, the water itself—everything seemed pulsating with a kind of energy. She found she could put questions to the experience. “What is my role in all this?” she asked. “I want to know,” she whispered. “Show me.” The rock, the trees, the water—all in silent chorus “answered”—not in words, of course—that her wanting to know, just that, was her part of the pulsating landscape. “Creation delights in the recognition of itself” is how she would later put it. She never talked about her experiences then—it seemed important not to—but recently she described them in a book called Epiphanies. When she gives talks about her book, half the people in the audience will exclaim, “Yes! That happened to me, too.’

Noam Chomsky was my colleague at MIT for fifteen years; he was one of the few geniuses I have met. I recall Chomsky saying that a cat cannot be expected to do algebra, so why should human beings with their cognitive limitations expect to fathom all the laws of the universe. I agree with Chomsky, except that for limitations I would substitute mystery. We are born in mystery, we live in mystery, and we die in mystery. value of psychic experience is that it deepens the mystery, not that it dispels it.

“I taught the great religions, but Kendra lived them, or the empathetic interconnections they teach, effortlessly.”

I do not need to visit psychics: I have a wife at home. I taught the great religions, but Kendra lived them, or the empathetic interconnections they teach, effortlessly. Often she would come home from her work as a psychotherapist with some story like this one. A working-class client had that day kept voicing Kendra’s thoughts, what was going on in her mind, before she could say it aloud. The man also told her, “You have a bad pain in your hip.” He knew, he explained, because he had absorbed the pain and was now feeling it in his hip. But don’t worry, he added, after he left he would pass it on to someone else. “No, you won’t!” she exclaimed. “Sit back down.” Living with Kendra was a reminder to this professor that there are other ways of knowing and other knowledges to know. I-he other day someone asked Kendra the secret of our long marriage. She answered, or avoided answering, “Oh, I cut items out of the newspaper to show Huston, and I think he likes that.” It is not the secret, of course, but she does show me “items” from a subtler news—-news from ultimate reality—and I do like that.

From – Tales of Wonder: Adventures Chasing the Divine