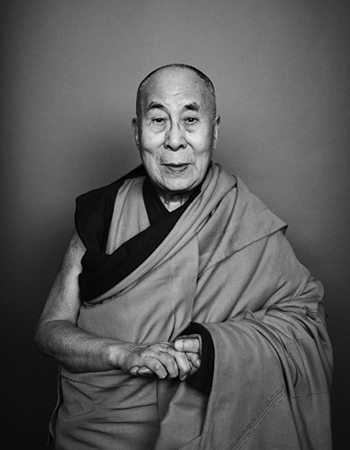 This excerpt from the Dalai Lama’s first autobiography about the early part of his life in Tibet is an engrossing description of his education as a young man, and his rigorous study of dialectics, metaphysics and the philosophy of religion. In his book, he sets his account of the hundreds of scriptures he was expected to read and memorize, often with reluctance, against the background of the political upheaval in China, and sizes up the way in which his focused study brought ‘a certain unique equanimity of mind.’

Political and other circumstances did not allow me to carry on my studies like the scholars of great talent and learning who devote their whole lives to the pursuit of religious knowledge and spiritual enlightenment. But for a period of thirteen years I was able to give a good part of my time and attention to these serious studies, and when I was twenty-four I took the preliminary examination at each of the three monastic universities.

These examinations are always in the form of congregational debates. The rules of procedure are simple, but dignified. Each student has to face a large number of opponents who choose whatever subject and whatever disputable point they think necessary to defeat their adversary, and all the standard works of Indian and Tibetan scholars, as well as Lord Buddha’s words embodied in the Sutras, are quoted to refute the contentions of the opposing party. At each of my preliminary examinations, I had to compete with fifteen learned scholars in these debates, three for each of the five treatises, and defend my thesis and refute their arguments. Then I had to stand before two very erudite abbots and initiate a dialectical discussion on any of the five principal subjects. In all these debates, strong formal gestures are made to emphasize each point, so that the arguments appear like battles of intellect, which indeed they are.

A year later, I appeared for my final examination, during the annual Monlam Festival in Lhasa, when many thousands of monks come into the city to attend the special Buddhist festival of prayer which is held in the first month of each year. This examination was held in three sessions. In the morning I was examined on Pramana, or logic, by thirty scholars turn by turn in congregational discussion. In the afternoon, fifteen scholars took part as my opponents in debate on Madhyamika (the Middle Path), and Prajnaparamita (the Perfection of Wisdom).

“Humanitarianism and true love for all beings can only stem from an awareness of the content of religion. By whatever name religion may be known, its understanding and practice are the essence of a peaceful mind and therefore of a peaceful world.”

In the evening there were thirty-five scholars to test my knowledge of Vinaya, the canon of monastic discipline, and Abhidharma, the study of metaphysics. And at each session hundreds of learned lamas in their brilliant red and yellow robes-my own tutors anxiously among them-and thousands of monks sat round us on the ground, eagerly and critically listening. I found these examinations extremely difficult, because I had to concentrate so hard on the subject with which I was dealing, and had to be so prompt in answering any questions. Several hours of debate seemed like an instant. Of course, I was proud and happy to be taking the final examination and to receive the degree of Master of Metaphysics, after so many years of studying the great teachings of Lord Buddha. But I knew that there is really no end to one’s need for continual learning until one can reach the highest stages of spiritual attainment.

Such a religious training, in my view, brings a certain unique equanimity of mind. The practical test comes when occasions of sorrow or suffering arise. The person whose mind is conditioned by the study and practice of religion faces these circumstances with patience and forbearance. The person who does not follow the path of religion may break under the impact of what he regards as calamities, and may end in either self-frustration, or else in pursuits which inflict unhappiness on others. Humanitarianism and true love for all beings can only stem from an awareness of the content of religion. By whatever name religion may be known, its understanding and practice are the essence of a peaceful mind and therefore of a peaceful world. If there is no peace in one’s mind, there can be no peace in one’s approach to others, and thus no peaceful relations between individuals or between nations.

The Dalai Lama
From: My Land and My People