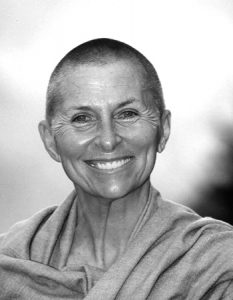 “Everybody has a geography that can be used for change. That is why we travel to far-off places. Whether we know it or not, we need to renew ourselves in territories that are fresh and wild. We need to come home through the body of alien lands.”

In 1993, Zen teacher Joan Halifax published a book called The Fruitful Darkness based on her anthropological engagements with Tibetan Buddhists, Mexican shamans, Native American elders and other tribal communities. In this excerpt from a chapter called The Way of the Mountain, she talks about the power and meaning of pilgrimage as well as the universal vigor of mountains as a geographic and metaphoric force. The disappearing peaks she invokes are reminiscent of Peter Matthiessen’s Nine-Headed Dragon River and Li Bai’s mountaintop meditation.

Everybody has a geography that can be used for change. That is why we travel to far-off places. Whether we know it or not, we need to renew ourselves in territories that are fresh and wild. We need to come home through the body of alien lands. For some, these journeys of change are taken intentionally and mindfully. They are pilgrimages, occasions when Earth heals us directly.

Pilgrimage has been for me, and many others, a form of inquiry in action. Although there is usually a particular destination to go to when on pilgrimage, it is the journey itself that is the thing. Once in dokusan (Zen interview) with Richard Baker Roshi, I asked the following question: “Going to the temple, you take the path. Entering the temple you leave the path. What does this mean?” Without a pause, his response was “Joan, the path is the temple.”

“Pilgrimage is a remembering in the passing through of sacred time and sacred space.”

People have traveled over this Earth with a heart of inquiry for millennia. They have sung through the land as a living being, offered themselves, their steps, their voices and prayers as acts of purification that opened them to an experience of connectedness. Whether it is Huichol peoples of Mexico who annually journey to Wirikúta, or Australian aborigines, whose song-lines connect dreamings across thousands of miles, or Hindu pilgrims who make their way to the Mother Ganges or Shiva’s Abode, or Buddhist pilgrims who reconstitute the life of the Buddha by visiting the groves and mountains, towns and villages where his birth, realizations, teachings, and passing occurred, pilgrimage is a remembering in the passing through of sacred time and sacred space.

Mountains have long been a geography for pilgrimage, places where peoples have been humbled and strengthened. They are symbols of the Sacred Center. Many have traveled to them in order to find the concentrated energy of Earth and to realize the strength of unimpeded space. Viewing a mountain at a distance or walking around its body, we can see its shape, know its profile, survey its surrounds. The closer you come to the mountain, the more it disappears. The mountain begins to lose its shape as you near it. Its body begins to spread out over the landscape, losing itself to itself. On climbing the mountain, the mountain continues to vanish. It vanishes in the detail of each step. Its crown is buried in space. Its body is buried in the breath.

“The closer you come to the mountain, the more it disappears.”

Mountain’s realization comes through the details of the breath. Mountain appears in each step. Mountain then lives inside our bones, inside our heartdrum. It stands like a huge mother in the atmosphere of our minds. Mountain draws ancestors together in the form of clouds. Heaven, Earth, and Human meet in the raining of the past. Heaven, Earth, and Human meet in the winds of the future. Mountain Mother is a birth gate that joins the above and below. She is a prayer house. She is a mountain. Mountain is a mountain.

“Some of us are drawn to mountains the way the moon draws the tide. Both the great forests and the mountains live in my bones.”

Mountains are extolled not only for their qualities but also for their effect on those who relate to them. Taking refuge in them, pilgrimaging to them, and walking around or ascending them has long been a way for the shaman and the Buddhist to purify and realize the mind of the mountain. The surface of inner and outer landscape, of the above and below, meet in the mountain body. The sense of place is confirmed in the mountain body. The spirit of place is confirmed when the mountain disappears into the landscape of the mind. Thus one reveres mountains.

Some of us are drawn to mountains the way the moon draws the tide. Both the great forests and the mountains live in my bones. They have taught me, humbled me, purified me, and changed me: Mount Fuji, Mount Shasta, Mount Kailas, the Schreckhorn, Kanchenjunga. Mountains are abodes for ancestor and deity. They are places where energy is discovered, made, acquired, and spent. Mountains are symbols, as well, of enduring truth and of the human quest for spirit. I was told long ago to spend time with mountains.

Joan Halifax
From – The Fruitful Darkness: A Journey Through Buddhist Practice and Tribal Wisdom

1 thought on “The Path That Leads Into the Mountains”