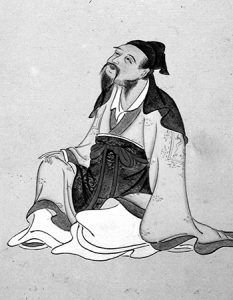 One of China’s most prominent poets of all time, Li Bai lived in the 8th century during the thriving Tang period which was a fertile time for great literature. Li Bai, who was friends with the poet Du Fu, and for whom Du Fu wrote a poetic ode, had a life of dramatically changing fortunes. A lover of wine, Li Bai spent a rootless life that took him from brazen poverty to the courts of the highest echelons of government, and was underwritten by an affinity with Taoism and Ch’an (Zen) Buddhism. In this short poem, he writes about the experience of zazen (meditation) using some of the simplest and most common imagery of the time – birds and clouds for the passing phenomena of the mind, and the mountain for the stability of awareness, which eventually is the only thing that remains.

The birds have vanished down the sky.
Now the last cloud drains away.

From: Crossing the Yellow River