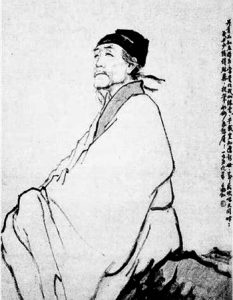 ‘This parting from the living brings constant pain,’ wrote eighth-century Chinese poet Du Fu (also known as Tu Fu) in 759 in an ode to friendship about his separation from Li Bai, who was in exile in the south of the country. Li Bai was also a poet, and along with Du Fu is still considered one of China’s most enduring and endearing literary figures. The two men had in common a love of the tipple, and liked to write while under the influence. Getting drunk in those days was considered more of a transcendental activity than it is now, though Li Bai especially also had a bit of a reputation for debauchery. Du Fu trained as a civil servant but spent most of his life in itinerancy, writing about the political landscape of the country and the personal tragedies that he witnessed. For another poetic friendship, see James Wright and Robert Bly.

Parting from the dead, I’ve stifled my sobs,
but this parting from the living brings constant pain.
South of the Yangze, land of pain and fever—
no word comes from the exile.
Yet my old friend entered my dreams,
proof of how long I’ve pined for him.
He didn’t look the way he used to,
road so far, further than I can guess.
His spirit came from where maple groves are green,
then went back, left me in borderland darkness.
Now you’re caught in the meshes of the law;
how could you have wings to fly with?
The sinking moon floods the rafters of my room
and still I seem to see it lighting your face.
Where you go, waters are deep, waves so wide,
don’t let the dragons, the horned dragons harm you!

From: Selected Poems of Du Fu