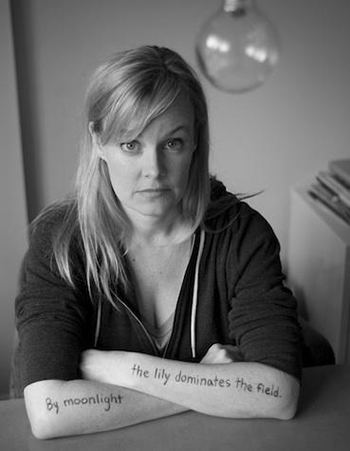 “In all the innumerable galleries throughout the art museums of the world, it is hard to find one featuring a pillow that does not also squeeze in a young woman’s breast.”

On the back cover of A Pillow Book, Suzanne Buffam defines her work in terms of what it isn’t: ‘Not a memoir. Not an essay. Not an epic. Not a spell…’ The list goes on, and rightly so, since it is hard to pigeonhole a writer like Buffam who picks up different poetic forms, from lists to snippets and musings in prose. A Pillow Book is a collection of such multi-faceted writing inspired by Sei Shonagon’s book of the same name from the 11th century. A court lady and a writer-poet, Sei Shonagon’s book is written in the Japanese style of zuihitsu – a genre of memoir-writing that incorporated various fragmented styles. The following are a few excerpts from Buffam’s beautiful and entertaining collection.

Sleeping nymphs. Nursing Virgins. Enraptured damsels. Tunisian odalisques. Desultory girls draped in curtains and curls. In all the innumerable galleries throughout the art museums of the world, it is hard to find one featuring a pillow that does not also squeeze in a young woman’s breast.

Ill-luck upon ill-luck, and a stone for a pillow, says a Spanish proverb. Weariness can snore upon the flint, says Belarius, but resty sloth finds the down pillow hard. A boor remains a boor, says a Danish proverb, even when sleeping on silken pillows.

Sleep faster, says a Yiddish proverb. We need the pillows.

Among the Minhe Tu of modern China, if the deceased has enjoyed a natural death—having married, that is, produced healthy offspring and grown old—her head is laid upon a pillow embroidered with a virgin boy and girl extending an embroidered plate of food and flagon of liquor inside a red coffin painted with stars. If her life has failed to meet these minimal requirements, she is thrown into the Yellow River.

Among the Ngoni of modern Tanzania, the feather-stuffed pillow is considered so intimate a possession it is often buried with its owner. When a chief among the Shona of modern South Africa dies, his pillow is passed on to his successor, who prays to it, as to the spirit of his ancestor, in times of crisis before sleep. Among the Luba of the Democratic Republic of the Congo, when the body of the deceased is unavailable for burial, as is often the case given present political realities, his or her pillow is buried instead.

Suzanne Buffam
From: A Pillow Book