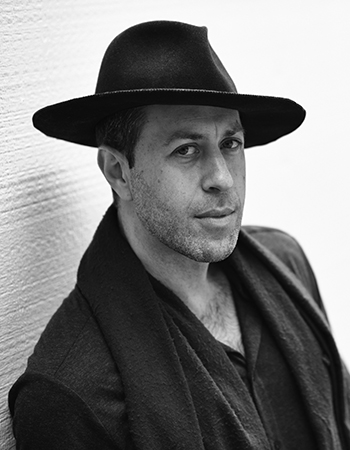 “if you are making
up the ritual as you go,
is it a ritual? if the loss is
a hole that cannot be filled,
is the remainder of your
life the ritual?”

Just as his book Go The F**k to Sleep was gaining radical traction as a global bestseller in 2011, Adam Mansbach’s life was devastated with the suicide of his brother in May of that same year. It took him eight years to finally be able to sit down and tell the story of his brother’s death, which he drafted in three weeks in the form of an epic poem. The result, I Had a Brother Once, is an elegiac and honest account of the devastation of suicide, the senselessness of grief, and the imperatives and difficulties of narrative when a loved one’s life is on the page. In this excerpt, Mansbach talks about the struggle of ‘keeping the wheel straight,’ of writing without making things legible or structured, of not imposing ‘a frame, a double helix of / narrative to snake through / the spine, to be the spine.’ Reaching out for ritual, alienated from the traditions of his Jewish ancestry, he wonders what it means to be untethered from tradition and to need to invent one’s own ritual in the face of grief.
For an in-depth interview with Adam Mansbach about his new book, click here.

the second time i was in
motion, walking through the
back room, the front room,
out into the heatwave night.
i wasn’t crying yet but i also
couldn’t speak or think.
my father’s sentence was
unrecognizable, a cluster of
words spinning in a void.
the notion that it was all
a mistake flashed through me
& fell instantly to ash.
no parent would say such
a thing about his child
to his child if there was any
hope. & here begins a different
kind of struggle, on this
page, akin to keeping the
steering wheel perfectly
straight, a struggle not
to crane out of this shot, not
to add voiceover, not
to do the one thing i am
trained to, which is make
things legible, impose
structure & plot, motivation,
a frame, a double helix of
narrative to snake through
the spine, to be the spine.
here i am, here we are,
not fifty feet from the news
of my brother’s suicide &
already i can feel a tug at
the reins. i don’t know if
naming these things can
sap their power or if it
constitutes a sacrifice
at their altar, an invitation
to the impulse i am trying
to disperse. what are
the rules of this endeavor,
am i supposed to unfold
the moments of this night
like an origami crane,
crease by crease, is that
the penance or the healing,
the ritual, a march toward
or away from what? penance
for what? if you are making
up the ritual as you go,
is it a ritual? if the loss is
a hole that cannot be filled,
is the remainder of your
life the ritual? are rituals
supposed to fill the hole or
deepen it until you can
crawl out the other side,
& who am i that i have to ask?
my mother’s mother’s
father’s parents were the
children of famed rabbis,
they came here & founded
a jewish community
in burlington vermont by
paying other jews to keep
the sabbath, making them whole
& a minyan by handing out
the wages they would have
lost in observing the holy day,
& here i am not even a hundred
& fifty years later, acting as if
the books my people carried
& died for are unknown to me.
here i am freighted by nothing,
reinventing the wheel, reinventing
the rack. daring to believe
that perhaps you only realize
a ritual was one after
you complete it, inscribe the
final character. a tear falls
on the page, becomes
the final period or some
stupid maudlin shit like that. 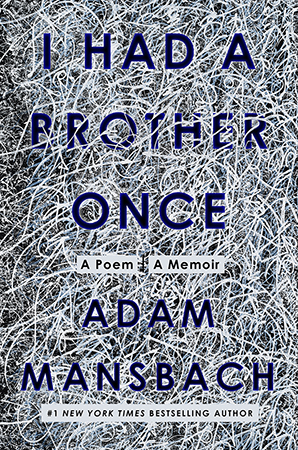 Adam Mansbach
From: I Had a Brother Once
Copyright © 2021 by Giants of Science, Inc.
All rights reserved.
Published in the United States by One World, an imprint of Random House, a division of Penguin Random House LLC, New York.