Jeff Mann’s sculptures and images of collages made from car parts go hand in hand with his passion for transport activism.

WHILE I WAS ARTIST IN RESIDENCE at a college I discovered all the amazing parts in cars. These past 18 months have forced me in directions I had not considered.

Prior to March of 2020, I used metal almost exclusively with occasional intrusions of printed fabric. But during the pandemic, with only online options available, I began exploring assembled pieces and taking photographs of them. The evolution of this direction has been rapid and left a lot of half-finished work in its wake.

Similar processes are used in my paintings and in the digital additions. Though it is difficult to see at times, my work is almost exclusively based on car parts and car infrastructure.

I believe there are too many cars in the world and the damage done is far more than just environmental. In many of these images, you can see built (bricks), natural (gravel), painted or sculpted backgrounds.

Currently, I am building either screens or individual objects to add to the constructions. 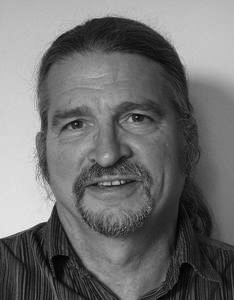 Jeff Mann lives in Fort Erie, Ontario right across from Buffalo, and works out of a shipping container. See more of his work at www.jeffmannart.com