Falling in love with someone in an open relationship might not bring the freedom we long for. 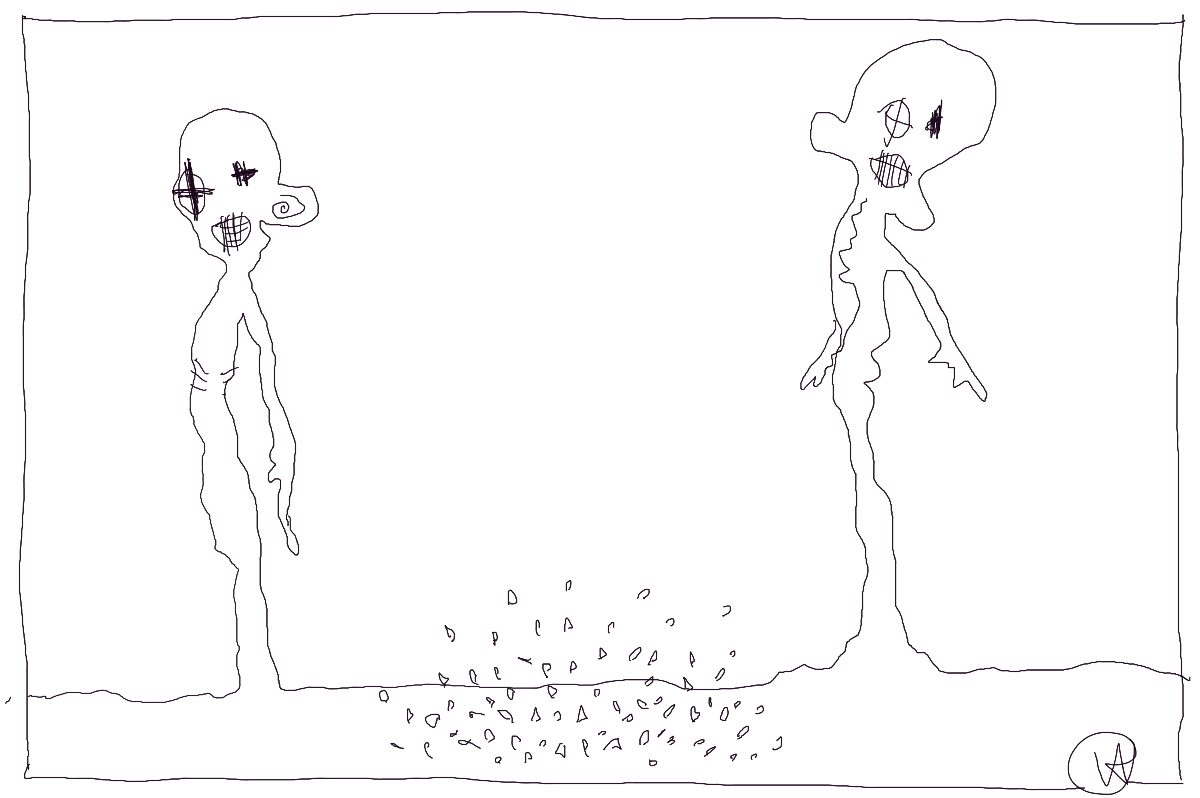 THE CAR THAT HAD BEEN BROKEN INTO wasn’t mine. It wasn’t his, either. Technically it belonged to his girlfriend – his primary partner of fifteen years. And though she knew he was with me, she didn’t know that we were at a private sauna. This wasn’t the kind of sauna in the fancy part of town with aromatic candles, New Age music and business hours that ended at 6pm. These were run-down hot tubs with gaudy signage open until 2am, two blocks from Walmart. The kind you paid for by the hour with cash only, ashtrays fixed to the wall.

I could see bits of glass on the ground as we came around the driver’s side in the crisp May night air. My hair was still damp from the steam, clinging to my face. I hadn’t bothered to shower after getting out of the hot tub, I’d just pulled my shorts on over my swimsuit. Chlorine permeated from my skin. He had changed back into his grimy work clothes, in which I found him so ruggedly handsome. Although he was a bar manager when we met the year before, he’d put himself through a program to become a land surveyor. As such, he now spent his days outdoors, in train tunnels, in the wilderness.

That day had been an exceptionally long one. He probably wouldn’t have come to meet me, but it was my birthday. Not that I begged – it was his idea. He’d had a rough shift and hinted that an hour at the seedy place in the strip mall near my house would be therapeutic.

It was a worknight for me, and it was already 9pm, but I didn’t hesitate. Our chances for spending time together were never guaranteed, so I had to take advantage of the opportunity. It was a perfect illustration of how imbalanced the whole situationship was – he held all the cards, while I waited anxiously for my hand.

The car was parked in the back lot, invisible from the main road. Walking back, I noticed the moonlight reflecting off shiny condom wrappers and single-serving plastic Jim Beam bottles flattened into the pavement. The last hour we had been right on the other side of the concrete wall with the skylight open to the fresh nighttime air. If it weren’t for the pulsating vibration of the spa jets, we’d have likely heard the commotion.

We called the non-emergency line, as a backpack with his flight logs had been snatched, and he’d been working on getting a pilot’s license for two years. I convinced him that a report was worthwhile (you never knew who they might bust one day with a trunk full of treasures). Eventually a female officer showed up. She hardly flinched when he explained that the owner of the car was his girlfriend, who was clearly not me. I’m sure she’d witnessed worse transgressions in her career. Not that we were doing anything wrong. We were all being ethically non-monogamous, after all – so ethical that his actual girlfriend didn’t actually know where he was. Although he was open with her about everything else, for some reason this establishment was off-limits. The officer relayed that there had been other break-ins at a nearby restaurant. He and I agreed that that was where he would say it had happened.

This was the first time we’d felt compelled to cover something up. And it was the last time we were together.

During our hour in the steam-filled room, we weren’t banging our brains out. We didn’t even have sex, though we definitely could have (let’s be honest, that’s what those “suites” are designed for). Although it started as a purely physical involvement a year before, we had never fully consummated the relationship, despite the fact that he had stayed overnight at my place on multiple occasions. This was the most perplexing aspect of all.

In this most recent iteration of our situation of ambiguous relations, the more intense it got, the less sexual it was. There was passion: being with him was electric, and we fooled around heavily. But at some point, it crossed into more tender, intimate territory, and we behaved more like shy teenagers, not experienced, erotically-adventurous adults. We talked and laughed and made out. There were sweet, light kisses and deep, sloppy ones.

Most non-monogamous couples have rules, and they did. She was bisexual and wanted playtime with girls, so he had a hall pass – for fleeting flings, not a second girlfriend. The rule was no meaningful time with peripheral partners. He stated this but kept pushing the boundaries.

I put up little resistance. For several months, our encounters were limited to once-a-month romps in the backseat. As someone who is fiercely independent and generally happy unattached, this worked for me. It was easy to compartmentalize. But then came overnight sleepovers at my place, extended day-time activities like a real couple and ongoing text conversations about the minutiae of our days. It didn’t take long for that nicely packaged compartment to burst open, bleeding out its contents everywhere.

For a long time, I tried to understand what he sought or found in me. I could’ve spent an eternity coming up with plausible narratives about his situation with his girlfriend, but it didn’t really matter. All I knew for sure was that they had some shit to figure out. And maybe I did, too.

The happiest moment of our relationship was when I made the first move. I had a crush on a cute guy, and I knew with 100% certainty the feeling was mutual. I was a monthly DJ at his bar, and by that point he could barely look me in the eye when he cut my check at the end of the night. He was endearingly awkward and subtly hot. When our bar had to close early one warm August night due to plumbing issues, I invited him to meet my friends and I at another place down the street after he closed up.

He finally showed, just before last call. Outside my friends departed while he and I lingered clumsily. We clearly did not want to separate yet, but it was late and there wasn’t anywhere to go. We ended up at a late-night Mexican joint. They didn’t serve alcohol past

2am, but we were able to talk and spend time together. That’s when he told me he was in an open relationship.

Everything intensified when he suggested we do something outdoors—”a hike or lunch on a patio.” It was the first time we were getting together in daylight, and we had the entire day – clearly any expectations on his part went beyond cheap thrills in a backseat. It broke all the rules. I didn’t know for sure what had compelled me to accept the invitation, except that it sounded like the kind of day I hadn’t enjoyed in a while. While my love affairs were often filled with passionate nights, adventurous afternoons were rare.

He didn’t have the car that day, so I drove. His place – their place – was on the way. He had let me drop him off at home before, which seemed odd, though I suppose it made everything seem more transparent and therefore legitimate in his mind.

By the time I made my way to his ‘hood to swoop him, he’d walked to a nearby café. Parking was terrible, so I pulled over a couple blocks away. I can still see him walking up. This was it. The start of a day with so much possibility. I had him all to myself. He wore a black t-shirt with crisp, dark-wash denim and white hipster sneakers, a black jean jacket flung over his left shoulder. Small cup of coffee in his right hand. Golden blonde hair. I thought I would explode into thousands of tiny bits. I left his empty coffee cup in my car for several days after.

Our destination was 45 minutes away, all part of my plan to prolong the adventure. I liked that he was in the passenger seat; I felt protective of him. At one point he tilted back and closed his eyes. It signaled that he was comfortable, and for an instant I imagined we were on a real road trip, the two of us escaping for an indeterminate amount of time. I wish I could’ve had one full weekend alone with him. I sometimes still second-guess whether I should have let it continue a little longer—to wring out a few more memories.

We spent the afternoon in a seaside town. He’d never been there before, which made it extra special, locking it in as ours. If he were to visit again, even with her, would he think of me? We had brunch and several rounds of afternoon cocktails. We held hands and giggled at corny souvenirs.

At one point, while waiting to cross the street, he asked if I had wondered why he was able to spend so much time with me that day. I hadn’t. And I didn’t want to be reminded that I might have been Plan B.

By 9pm that night we were back at my place laying around, talking, touching, laughing. Eventually we dozed off. Around 4am he got up suddenly. I thought he was going to the bathroom, then I heard him pull his pants on and get dressed. He walked out to the living room. I followed a few minutes later. He had called an Uber. My heart was pounding so hard it surprised me.

We sat there silent in the dark for a few minutes. I was speechless.

“I wish I had realized you weren’t spending the night,” I finally said. “I’d rather you had left hours ago.”

“There are so many things I can’t say,” I continued, “and questions I don’t want the answers to.”

He could be cold in moments, something I never held against him. I was like that, too, sometimes. Stoic. He became so matter-of-fact and distant after spending eighteen intimate hours together.

“I had a really nice time today.”

And then it happened. The moment I had been dreading since before the day began. He left. And I knew I was fucking doomed. 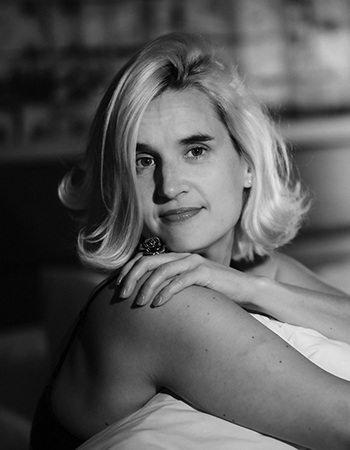 Elizabeth Blue is a writer, DJ and teacher based in the Bay Area, originally from Las Vegas, NV. She has been published in the Sad Girls Club literary blog and produces a personal poetry zine called “Splendor”. Her work revolves around themes of lust, love and longing, but sometimes she writes about music, too. She is a self-proclaimed quirkyalone and has two cats.