Gabriela De Paz’s flower paintings are portraits of emotions and a homage to the perpetual flux of the human condition.

MY ART SEEKS TO PORTRAY how memory disregards certain elements while enhancing others, and the ways in which we personally identify the self with the external world. These watercolors are emotional self portraits while also being a portrait of nature. In this series I use watercolor, gouache, and sometimes colored pencil. My process is to begin with thick brushstrokes or drops of watercolor and allow the composition to emerge organically and intuitively.

I used to walk past these morning glories growing on the fence of the ruins of an abandoned house nearly every day. The flowers at first glance appear to be very delicate but are in fact strong, as they have thrived in a hostile environment for years. I felt a strong connection between their constant changes in color and my own vacillating emotions. I felt hope in their wispy, transparent pink petals at dawn. But walking by later in the day, I would see something sad and mournful in the way the pink turned shades of purple and blue, in the darkening of the green leaves. At some point it started to feel like they weren’t just mirroring my emotions – they were sharing them. Their decaying house became a destination; the flowers had become my friends and confidants.

I later started painting the flowers as I saw them in my memories, and tried to capture how they appeared at different times, different days, and different seasons. I wanted to recreate their beauty and resilience as they survived in an environment of desolation and loss. These paintings became a way for me to depict and process my own mental and emotional struggles. They became portraits of grief, hope, perseverance, and many other feelings that I don’t know how to express in words; just art. 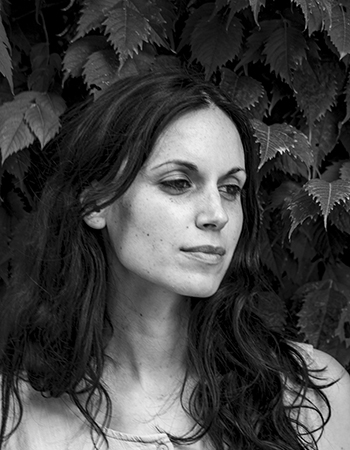 Gabriela De Paz was born and raised in California and moved to Spain in 2016. She has had a variety of group and solo shows of her watercolors and collages but also expresses herself with photography, ceramics, and drawing. She currently resides in Valencia, Spain with her husband and cats.