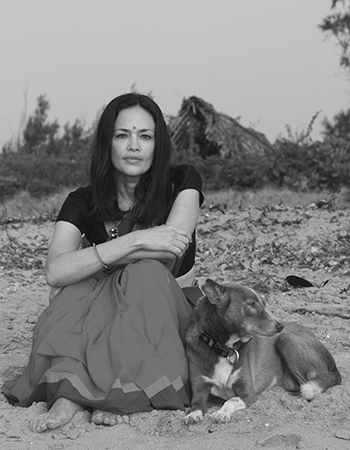 “It’s the difficulty of reconciliation.
This with that. Jack and his box.
The continual threat of being startled.”

Tishani Doshi’s poem Hope is the Thing from her upcoming collection A God at the Door pays homage to twelve-year-old Jamalo Madkam who worked in a chili field in the Indian state of Telangana. Jamalo died of exhaustion after walking for three days straight trying to get back to her home when India shut down for the Covid-19 pandemic. Tishani Doshi is a poet and a novelist who lives in Tamil Nadu, India.

Hope Is the Thing

These days I pay attention to birds.
Bulbul gorging in the yellow trumpet bush,
reminding me to drink my daily fill.
Ring-necked parakeet, flying past
my office window like a gouache
on loose-leaf paper. If we knew our death days
as we do our birth days, would we celebrate
them with garlands of wildflowers, or rush
past them in the corridor of each rolling year
with a shiver? Would we go on periodic diets
of martinis and wafers, trying to unhinge
ourselves? I like to think of hope
as an organism inside us, a cluster
of molecules into which energy flows in
and out. A hatchery whose inhabitants
sometimes grow thin or corpulent.

As a girl I wanted a man with a healthy
jaw like Jean Gabin or Dharmendra.
I was thwarted by a teacher in Madras
who sent me home to lower the hems
of my skirts, shrieking, Too short, too short!
Hope died there that day and once again,
in a motel overlooking a strip mall in Ohio.
It’s all right to be momentarily proud
of being an unfashionable shapeless martyr.
It’s okay to feel the loneliness crush into you
like a boat bashing against a pier in a hurricane.
You’ll find your way back into the world
by climbing into the wet fur of dark
and measuring all the absences in the park.
You’ll turn and say to whoever your companions
are, Don’t worry dears, we’re not far off.

I’d like to grow up to be a woman
with a crown of silver hair and a walled
garden, but what I have instead are a pack
of piebald dogs and some pots of mint and sage.
What is this greed of wanting more,
of baking four and twenty blackbirds in a pie
and expecting them to sing, when you know
that a twelve-year-old girl, who makes her living
picking chilies, has just died of exhaustion
walking home? And as you learn her name,
Jamalo, and are figuring out how to mourn
her, someone else will say, Look,
the flamingos have returned to Bombay.
Look how this carpet of pink brightens
the day. It’s the difficulty of reconciliation.
This with that. Jack and his box.
The continual threat of being startled.

Maybe what you miss is what’s simple,
which isn’t childhood, but that bird
of prey holding the air with its claws.
If you knew it would cost nothing
to keep your wings open like an albatross,
that you could go ten thousand miles without
a single flap, that it has to be this way,
this glissando between soaring and falling,
you could pack up your indignations
and move toward the phone booth
in the sky. A god at the door sitting
on a giant buffalo offers you a sip
of wine to make the bitterness go away.
Your final phone call is to the future,
We’re fine, you say. We’re all going to be just fine.

Tishani Doshi
From A God at the Door. Used with permission from Copper Canyon Press. 2021

1 thought on “Tishani Doshi – Hope is the Thing”