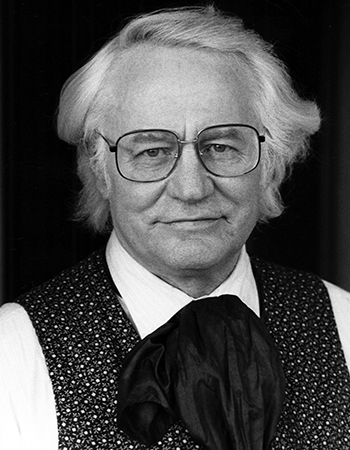 “if affection has put us into the stream,
Then we have to agree to where the water goes.”

After the death of the poet William Stafford in 1993, his friend and fellow poet Robert Bly wrote this tribute against the image of water flowing down the rocks of Montana gullies, the carrying force that Bly perceived to be at the heart of Stafford’s spirit. The final verse of this poem is deeply touching: Bly writes in homage to his friendship that rather that sitting on the shore, we are put into the current by the strength of our affection, and that once in the stream and away from the safety of the shore, ‘we have to agree to where the water goes.’

Well, water goes down the Montana gullies.
“I’ll just go around this rock and think
About it later.” That’s what you said.
When death came, you said, “I’ll go there.”

There’s no sign you’ll come back. Sometimes
My father sat up in the coffin and was alive again.
But I think you were born before my father,
And the feet they made in your time were lighter.

One dusk you were gone. Sometimes a fallen tree
Holds onto a rock, if the current is strong.
I won’t say my father did that, but I won’t
Say he didn’t either. I was watching you both.

If all a man does is to watch from the shore,
Then he doesn’t have to worry about the current.
But if affection has put us into the stream,
Then we have to agree to where the water goes.