WHEN THE FALL SKY TURNED ORANGE from fire, and a pandemic roared, and the children lay in bed all day, and cancer took residence in your armpits, you found a bear in your basement.

He tore out the insulation, made himself a matted bed the color of skin in the deepest, darkest reaches where his eyes shone like steel spoons.

Time came every night in sleet and snow threatening to cover the mailbox-sized hole he’d torn from your house and wedged his big bear body through. It wouldn’t be long, you thought, until he fashioned furniture. A rocking chair. A kitchen table. A latrine.

You appealed to the sheriff, bear activists and bear websites. Your tight voice asked: how do I get rid of him? Behind your question was a beg: please come carve him out. They could only offer advice and treatments. The rest you would have to do on your own. You had better find fight, they said, as if that was something tangible, like mace.

As the world pitched into darkness, your eyes charged like bullets. You opened the basement door, rattled a wooden spoon against a pot until your hands were raw and your throat rough rope. The bear curled tighter, his eyes tucked away from you. It appeared as though you couldn’t win.

That night you left the door open and laid in bed lamely. In the morning, daylight cast peaches over the slopes, where the bear’s prints ran through snow. You stood in a puddle of wood he ripped from your house.

Around you the pine trees lost needles, the daffodils were swallowed in frost, the willows were bitten. But you sprouted. Your wild hair fanned out like the florets of a dandelion. Your arms wrapped as new leaves across where the cancer ran. 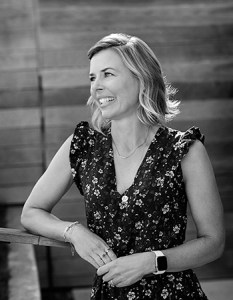 Jennifer Christgau-Aquino is a fiction writer, poet and award-winning journalist who’s written for Ruminate, Magnolia Review, Sad Girls Club, Forbes, The Huffington Post and the Six Fifty, among others. She holds an MFA from San Francisco State. When not staring out a window or finding surfaces to disinfect, she writes.