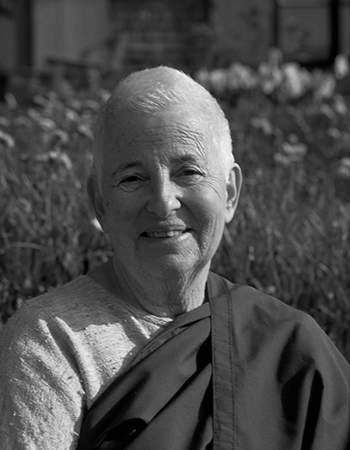 “The more one gives out of compassion, the more compassion one necessarily has to have. It’s obvious and logical, yet hardly anyone considers this aspect.”

German-born Ayya Khema was a Buddhist teacher and a nun in the Theravada tradition. She was a dedicated advocate of women’s practice in the tradition, setting up her own monastery in Australia. In this excerpt from her book, Being Nobody, Going Nowhere – an introduction to the basic tenets of Buddhism – she talks about the first of the ten paramis (perfections or virtues), generosity. The perfections in Buddhism are principles to be followed or cultivated over the course of a lifetime, and generosity, as Ayya Khema reminds us, is a doorway to the others, which include wisdom, energy, patience and truth. In this short essay she looks at the different levels of generosity – beggarly, friendly and princely, as well considering the highest level of the virtue which is giving one’s own life to the service of others.

The spiritual qualities we need to cultivate start with generosity. The one at the top of the list is the one that opens the door. It doesn’t mean that the others are less important, but unless the first one has been cultivated, that particular pathway has not opened up yet. We have to enter a path somewhere, and it is the first step, or the first quality, that gives us our start.

The Buddha talked about three different kinds of generosity: the beggarly kind, the friendly kind, and the princely or kingly kind. The beggarly kind of generosity is when one gives away what one doesn’t want anyway — the things that are cluttering up the house and one wants to tidy up. Giving away these things, while better than nothing, isn’t very generous, because one is not diminishing one’s own wants and attachments in any way.

The friendly kind of generosity occurs when we share what we have. We share it with as many people as come into our orbit. We give away evenly, keeping some and giving away some.

The princely kind occurs when we give away more than we keep. Pretty rare, isn’t it? Most people don’t do that.

Generosity doesn’t apply only to giving things away. Not everybody has material possessions to give away, although most of us do. In fact most people have so many more belongings than they can remember, that they only find them when they prepare to move house.

“Giving one’s life for others is the greatest generosity. It is almost impossible for ordinary people to do that. But there are degrees of giving, and a little giving diminishes the ego a little. A lot diminishes it a lot if the right motivation is behind it.“

We own so many things for day-to-day use in the household that it would be possible to give most of them away and still have enough. But that’s not the only kind of giving there is. There is the giving of one’s time, one’s attention, concern, care, and the sharing of one’s skills and abilities. That’s an important giving and it’s done on a large scale by governments and foreign aid agencies. But the thing that’s wrong with that is that perhaps the people who actually do the work aren’t in it to practice generosity but are doing it because they are getting paid for a job, so it is a commercial enterprise. But giving away one’s skills and abilities without any thought of getting something in return is compassionate giving. The Buddha gave his Dhamma out of compassion.

Generosity of any kind diminishes the ego, and that is why it is the first of the ten virtues that need to be cultivated and protected. When the Buddha was still a bodhisattva aiming at enlightenment, those were the qualities that he perfected and there are many stories about this in the Jataka tales of the Buddha’s former births.

The generosity of bodhisattvas goes as far as giving their own lives. Giving one’s life for others is the greatest generosity. It is almost impossible for ordinary people to do that. But there are degrees of giving, and a little giving diminishes the ego a little. A lot diminishes it a lot if the right motivation is behind it.

Diminishing the ego is the essence of the pathway to purification and leads to the eventual actual experience of nonself. One can’t hope, wish, or imagine that one can experience this unless one has started to do something about one’s egocentricity. How would it be possible? Generosity is an excellent beginning.

Ayya Khema (1923-1997)
From: Being Nobody, Going Nowhere: Meditations on the Buddhist Path