WE BEGAN OUR ASCENT of the South Cirque at 5:20am. A few other groups had set off at the same time so there was an uneven scattering of silhouetted of figures snaking behind the refuge. Snow had fallen thickly overnight, the path was invisible and it was very dark. Most of us had barely slept. Hussain set the pace slow.

I was not prepared for how daunting the icy summit would look as we shuffled out into the night. It is a platitude to state that at 3,000 meters, the world follows different rhythms but still, I hadn’t expected to feel it so palpably. Knuckled peaks are clenched like igneous fists and the air steals oxygen from your body.

We crossed behind the refuges, traversed the icy stream and started to climb steadily. In the thin air, on three hours sleep, it was arduous. I followed Hussain closely and focused on placing my feet into the tracks he left. The world shrank into three elements: the beam of the head torch; the clustered footprints illuminated in the snow ahead; and the regulation of my breath. Other than the squeak and crunch of boots and the rustle of Gore-Tex, there was a weighty silence. Everything pulled towards Hussein: his careful steps, the deliberate prodding of his walking poles, his familiarity with the route, his cautious upward tread. Darkness shrouded the world; our vista was funnelled into the crumbling tracks, and the effort of breathing efficiently was entirely absorbing. We continued in this trudge for some time: one step more; one step more, breath in; one step more; one step more, breath out.

There was something that resonated with me in this rhythm of walking and it took me a while to connect it to my memories of early grief. That moment after freefall, when the unthinkable has happened and you have to continue with your days. The slow pulse that you find when there is not enough air but you need to keep breathing.

As in the formation of some of these mountains and valleys, grief works like an intractable glacier remoulding the old landscape. At first, it seems impossible that the fundament of our lives could be so plastic. I have a memory of sitting in the corner of my sister’s porch, retching sobs onto my knees, rain beating a tattoo on the glass roof. At forty, I experienced emotional extremities that I had not known since the primitive tantrums of early childhood. I had no idea that I was capable of such anger and sorrow, that I could feel so much.

The break-up of my family unit unleashed something subterranean and disorienting in me – a tectonic scream beyond the reach of a rational frame about people growing apart or new beginnings. I was beyond such sense and calm in those early moments. Every navigational point that I had hitherto used to steer my past, present and future vanished. I could see nothing more than a footprint in the darkness ahead.

This was why, in some puny act of resistance, I clung as rigidly to the routines of my old life as I now cling to Hussein’s lead. I swallowed food dryly at mealtimes, I went to bed at bedtime and shut my eyes, I went to an exercise class at 6:15 am three times a week, I ran at the weekends, I went to work, I cooked breakfast, made packed lunches and I cooked dinner. People thought I was a Pillar of Strength but I was terrified that if I stopped following those imprints, I might stop breathing.

Like now, the atmosphere was parsimonious in its doling out of oxygen and my body worked beyond the limits of what I had thought it capable. I take comfort in the memory of having survived those extremities as with each scanty breath, I feel the lactic acid burning in my hamstrings, inching me closer to the summit. Right now, I’m ambivalent as to whether I want to reach my destination but neither do I consider turning back. I have stepped outside of intent: each step is a destination in itself. Grief and climbing mountains, it turns out, are very zen.

At the top of a ridge Hussein stops. He directs me to the side of the path. We cannot stop for long because the sub-zero temperatures mean that we lose heat fast. The sky is black and clear, the moon a bright disc, there are pinpricks of constellations. This is the highest that any of us have ever been. The white mass of the peak hangs over us and high above, on a distant ridge, we can make out the twinkling torches of another climbing party. The landscape is silent and shadowy but the snow reflects the moonlight and as our eyes adjust, we can pick out the surrounding peaks: we are cupped in the valley’s open hand.

This was not the beauty I had expected to see: the grey sweep of the snow-covered scree, the petrified ridges, the grim silhouette of the crags. I had never considered walking in mountains in the dark and the snow and I don’t know whether it is something that will happen to me again. It was an extraordinary experience to stand in that auditory and visual silence, semi darkness filtering a netherworld of shadow and dissociated shapes, where looking up was more vertiginous than looking back. The mountain was massive and mute.

The memory of it settles in my imagination like a fine charcoal silt: heavy, soft, quiet. 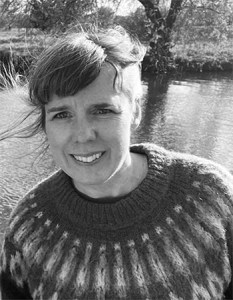 Sonia Trickey is a secondary English teacher in Cambridge, UK. She has had short stories accepted by Calyx Arts, Toasted Cheese, Litro, Cranked Anvil, Beyond Words, The Disquiet Prize and Fictive Dream. She has attended creative writing programmes at Cambridge University