Happenstance by Samara Landau is a work of complexity, pattern and rhythm, set around fate, coincidence and loss. The repetition and resourcefulness of the same six words that conclude each line within each stanza, in varying order, are thrilling. As for the background behind the poem, Samara explained to The Dewdrop, “I decided to go on a hike by myself recently. As I began the hike, a father began making small talk with me and we ended up walking almost the entire way. He shared a lot of his life story and I listened. This poem, is the result of that encounter. I mostly kept thinking about coincidences, accidents, and the timeliness of the meeting and how I could have ended up in a different place at a different time, as he could have too.”

He told me his daughter killed her
self almost immediately after we met
and I wondered what I could do for this father
mourning a loss so heavy after years
as we walked in the woods.
What forces brought us together I do not know,

nor do I understand why she could not live in this life and know
what people and places and animals life could bring her
if she chose to remain walking in the woods
among the ravens, butterflies and snakes we met
that I will likely forget after many years.
When I looked back on this day with her father

I will probably not think of her father,
but of what I did not know I know
about death and life and days and years,
I will think of why it was him and not her
that I happened to have met
on a sixty-two degree day in the woods

I will think about being in the woods
with my own father
and what he would do if he met
a young girl who thought she did not know
anything about her
self at twenty-one years.

I will think about the year
he got us both lost in the woods
and whether he would tell this “her”
that story or about what he thought it meant to be a father
to a daughter. Or if he would just talk about what he knows:
his stories: the places he lived, the people he met

Just like this father hoped that this young girl that he met
might, after the multitude of years
in which he did not know
whether he would ever be out of the woods
in losing his identity as a father,
no longer fathering her, 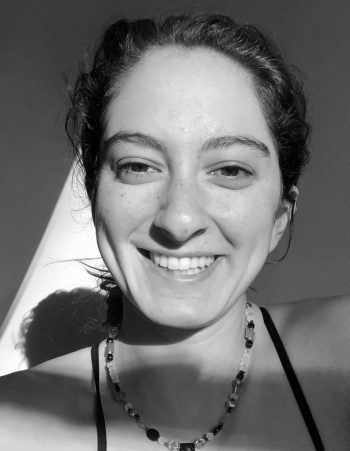 Samara Landau is a senior at Skidmore College studying psychology, neuroscience and poetry. Her work is published in Beyond Words Magazine, Cathexis Northwest Press and will be published in The Closed Eye Open, HerWords Magazine, and Color Tag Magazine. She is currently working on a few projects; she is a reader for Beyond Words Magazine LGBTQ+ anthology and is creating a literary journal featuring college students. When she’s not writing, she’s watercoloring or rock climbing in the tri-state area.