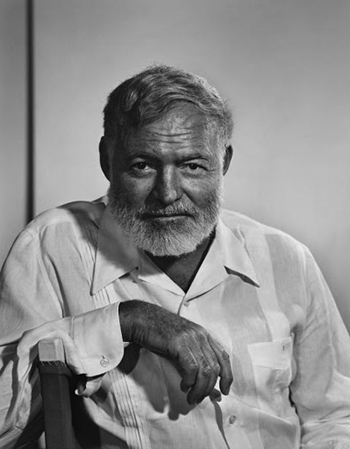 “Every day is a new day. It is better to be lucky. But I would rather be exact. Then when luck comes you are ready.”

Ernest Hemingway’s The Old Man and the Sea, has to be one of the most accomplished accounts of a lifetime’s intimacy with the sea. The drama of the book, which is ultimately a fable about fate, endurance and the struggle against destructive forces, takes place on a small fishing boat in the Gulf Stream off Cuba. From the perspective of the aging fisherman Santiago, Hemingway sketched portraits of the sea from various angles, including its great silence as well as its masculine hostility and feminine power over life and death.

Sometimes someone would speak in a boat. But most of the boats were silent except for the dip of the oars. They spread apart after they were out of the mouth of the harbour and each one headed for the part of the ocean where he hoped to find fish. The old man knew he was going far out and he left the smell of the land behind and rowed out into the clean early morning smell of the ocean. He saw the phosphorescence of the Gulf weed in the water as he rowed over the part of the ocean that the fishermen called the great well because there was a sudden deep of seven hundred fathoms where all sorts of fish congregated because of the swirl the current made against the steep walls of the floor of the ocean. Here there were concentrations of shrimp and bait fish and sometimes schools of squid in the deepest holes and these rose close to the surface at night where all the wandering fish fed on them.

In the dark the old man could feel the morning coming and as he rowed he heard the trembling sound as flying fish left the water and the hissing that their stiff set wings made as they soared away in the darkness. He was very fond of flying fish as they were his principal friends on the ocean. He was sorry for the birds, especially the small delicate dark terns that were always flying and looking and almost never finding, and he thought, the birds have a harder life than we do except for the robber birds and the heavy strong ones. Why did they make birds so delicate and fine as those sea swallows when the ocean can be so cruel? She is kind and very beautiful. But she can be so cruel and it comes so suddenly and such birds that fly, dipping and hunting, with their small sad voices are made too delicately for the sea.

Why did they make birds so delicate and fine as those sea swallows when the ocean can be so cruel? She is kind and very beautiful. But she can be so cruel and it comes so suddenly and such birds that fly, dipping and hunting, with their small sad voices are made too delicately for the sea.

He always thought of the sea as la mar which is what people call her in Spanish when they love her. Sometimes those who love her say bad things of her but they are always said as though she were a woman. Some of the younger fishermen, those who used buoys as floats for their lines and had motorboats, bought when the shark livers had brought much money, spoke of her as el mar which is masculine. They spoke of her as a contestant or a place or even an enemy. But the old man always thought of her as feminine and as something that gave or withheld great favors, and if she did wild or wicked things it was because she could not help them. The moon affects her as it does a woman, he thought.

He was rowing steadily and it was no effort for him since he kept well within his speed and the surface of the ocean was flat except for the occasional swirls of the current. He was letting the current do a third of the work and as it started to be light he saw he was already further out than he had hoped to be at this hour.

I worked the deep wells for a week and did nothing, he thought. Today I’ll work out where the schools of bonito and albacore are and maybe there will be a big one with them.

Before it was really light he had his baits out and was drifting with the current. One bait was down forty fathoms. The second was at seventy-five and the third and fourth were down in the blue water at one hundred and one hundred and twenty-five fathoms. Each bait hung head down with the shank of the hook inside the bait fish, tied and sewed solid and all the projecting part of the hook, the curve and the point, was covered with fresh sardines. Each sardine was hooked through both eyes so that they made a half-garland on the projecting steel. There was no part of the hook that a great fish could feel which was not sweet smelling and good tasting.

The old man always thought of her (the sea) as feminine and as something that gave or withheld great favors, and if she did wild or wicked things it was because she could not help them. The moon affects her as it does a woman, he thought.

The boy had given him two fresh small tunas, or albacores, which hung on the two deepest lines like plummets and, on the others, he had a big blue runner and a yellow jack that had been used before; but they were in good condition still and had the excellent sardines to give them scent and attractiveness. Each line, as thick around as a big pencil, was looped onto a green-sapped stick so that any pull or touch on the bait would make the stick dip and each line had two forty-fathom coils which could be made fast to the other spare coils so that, if it were necessary, a fish could take out over three hundred fathoms of line.

Now the man watched the dip of the three sticks over the side of the skiff and rowed gently to keep the lines straight up and down and at their proper depths. It was quite light and any moment now the sun would rise.

The sun rose thinly from the sea and the old man could see the other boats, low on the water and well in toward the shore, spread out across the current. Then the sun was brighter and the glare came on the water and then, as it rose clear, the flat sea sent it back at his eyes so that it hurt sharply and he rowed without looking into it. He looked down into the water and watched the lines that went straight down into the dark of the water. He kept them straighter than anyone did, so that at each level in the darkness of the stream there would be a bait waiting exactly where he wished it to be for any fish that swam there. Others let them drift with the current and sometimes they were at sixty fathoms when the fishermen thought they were at a hundred.

But, he thought, I keep them with precision. Only I have no luck anymore. But who knows? Maybe today. Every day is a new day. It is better to be lucky. But I would rather be exact. Then when luck comes you are ready.